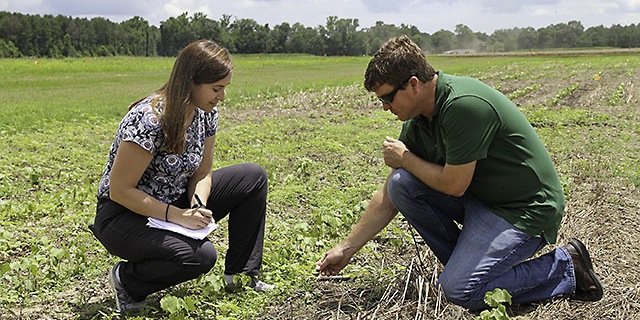 WASHINGTON — An onslaught of the weed Palmer amaranth in the southeastern United States has left many farmers wondering if they should continue using environmentally friendly cover crops and conservation tillage, or switch to conventional tillage.

Palmer amaranth is aggressive, drought tolerant, a prolific seed producer, and capable of developing resistance to glyphosate, known as “Roundup.” Because of that, thousands of acres in Alabama and elsewhere are at risk of being converted to conventional tillage, which may better control the weed, but increases soil erosion and threatens long-term soil productivity.

Agricultural Research Service (ARS) scientists at the agency’s National Soil Dynamics Laboratory in Auburn, Alabama, are showing cotton farmers in the region how they can control the weed, save their soil, and still generate a profit: They can conventionally till weed-infested fields for one year and then go back to conservation tillage for the next two years.

Duzy estimates that a farmer would save approximately $25.57 per acre per year in the second and third years by switching back to conservation tillage. That would represent a $15,342 savings each year on a typical 600-acre Alabama cotton farm.

If farmers decide to plow for a year because of weed infestations, they should consider adopting a high-residue cover crop and immediately return to their conservation system in subsequent years, according to Duzy. They don’t have to plow the soil year after year.

Video available: Are we making progress on weed management?
July 7, 2021