Home / Ohio / Control of multiflora rose in pastures
A new user experience is coming! We'll be asking you to login to your Morning Ag Clips account March 1st to access these new features.
We can't wait to share them with you! Read more here. 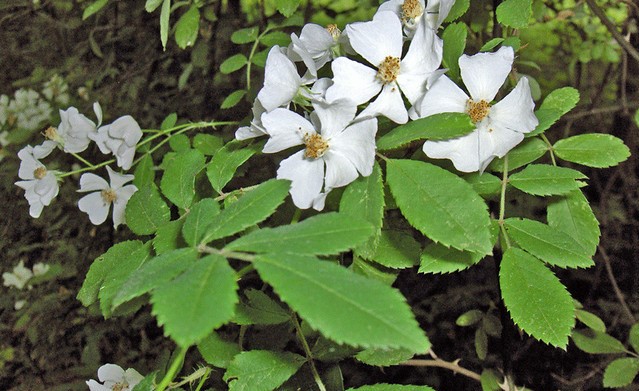 Multiflora rose has made the list of noxious weeds in many states and is taking over many pastures in this part of the country. The battle to gain control is difficult and maintenance is continual. (Homer Edward Price, Flickr/Creative Commons)

COLUMBUS, Ohio — There is one pasture project that never seems to go away. That is controlling the multiflora rose. The plant was first introduced into the United States in 1866 to be used as a rootstock for grafting roses. About 70 years later the U.S. Soil Conservation Service promoted the use of multiflora rose as a “living fence” and a means of erosion control. The adaptability of this plant allowed it to get out of control. Over the years this plant has made the list of noxious weeds in many states and is taking over many pastures in this part of the country. The battle to gain control is difficult and maintenance is continual.

The leaves and thorns on this plant make it easy to identify as a rose. Left on its own, this plant can quickly form dense thickets over 6 feet high. The white flowers it produces in May to June lead to seeds that birds are more than happy to spread throughout pastures. One multiflora rose can produce up to 500,000 seeds per year. Once deposited these seeds can remain viable for up to 20 years. Seeds are not the only way this plant spreads. Stems that are in contact with the ground can form roots which become a new plant, and roots are also able to produce new plants.

What makes this such a problem plant? Most species of pasture animals do not eat multiflora rose. This allows it to out compete the plants the animals prefer to eat, and it takes over larger areas of pasture every year. Thorns can also cause damage to eyes and other sensitive skin areas. You probably have noticed how animals will leave a patch of grass around the multiflora rose. If you add up all the patches of pasture that are lost to these weeds it soon becomes a significant amount.

There are a variety of methods available for controlling multiflora rose.

Pulling it out is an option if you only have a few plants to deal with but, if you do not get all of the roots new shoots will soon emerge.  Routine mowing will keep these weeds under stress, which may cause some to die. Mowing will help slow the spread but is unlikely to kill a large percentage of the plants.

Goats are likely the best biological method of control for multiflora rose. About 80% of a goat’s diet can come from browse and goats are often happy to eat multiflora rose. Adding some goats to your pasture can help remove woody plants. The challenge with goats is the ability to keep them in the desired fenced area. They also need to continue eating these plants to the ground until the root reserves are used and the plant dies. A second biological control, Rose Rosette Disease, is a viral infection carried by small mites. It can kill multiflora rose but will also kill ornamental roses and some fruits. Because of the damage to other plants this biological control is not being promoted. A third biological possibility is a rose seed chalcid wasp, but these are not common enough to be significant.

There are several herbicide options available and the effectiveness of each may depend on the season. Basal bark and cut stem applications can be conducted year-round. Foliar applications are most effective from now until fall. The 2020 Ohio Weed Control Guide is an excellent resource that has reviewed the effectiveness and application considerations of many herbicides. The following information is from that guide which can be obtained from your local Extension Office or online. I will just concentrate on a few of the foliar options.

An herbicide of 2,4-D plus triclopyr (examples: Crossbow, Crossroad, Candor) can be used in a foliar application and is very effective from late April through early June. A 1.5% solution will kill multiflora rose and other broadleaf plants but will not kill grass so you can spot spray without leaving dead patches. There are some grazing restrictions such as 14 days after treatment for dairy animals. Other livestock does not have a waiting period between application and grazing but remove animals 3 days before slaughter. Read the label for more details.

Glyphosate can be used as a spot treatment when mixed at a 2% volume to volume rate. It is best used in late spring to summer when the plants are fully leafed. Glyphosate has the advantage of lacking soil activity so can be used around trees if carefully applied. This will kill most plants that it comes in contact with in a pasture so overspray will cause bare patches.  Grazing or harvesting should not occur for 14 days after application.

Metsulfuron methyl (examples: Patriot, Cimarron Plus) has also been very effective at controlling multiflora rose. It is best applied as a foliar spray in late spring or summer when plants are fully leafed. For spot spraying mix at a rate of 1 ounce per 100 gallons of water. This product has a long residual time and restrictions of 34 months for many crops. There are also restrictions where runoff may occur. There are however no grazing restrictions at this application rate.

The label of the pesticide is the law and must be followed so read the label before mixing or using the pesticide. The three treatments above are not the only options but are examples of treatments that have worked well in Ohio.

Due to the characteristics of multiflora rose there will always need to be a follow-up program to keep the numbers down in pasture areas.