Home » Consumers still want meat – but not as much 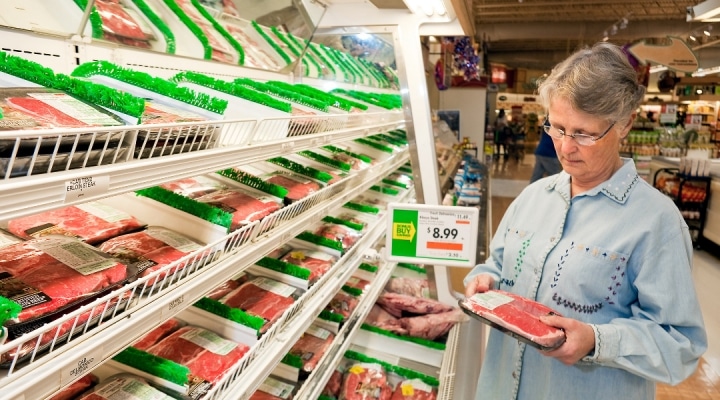 Overall, 76% of shoppers feel meat should be part of a healthy, balanced diet, an increase from 64% in 2020. Only 67% of flexitarians agree. Low carb diets continue to be popular, and consumers want protein highlighted with in-store marketing. (U.S. Department of Agriculture, Flickr/Creative Commons)

DENVER — Eating meat is still the norm, according to the Power of Meat report by 210 Analytics that looked at trends among 1,501 representative US shoppers along with actual retail purchases. The survey addressed all meat, imported and domestic, sold through retail food outlets during the 52 weeks prior to December 27, 2020. The report was sponsored by CRYOVAC and presented at the Food Marketing Institute 2021 Meat Conference.

The report showed that 71% of consumers identify as meat eaters. Vegetarians/vegans accounted for 6% of consumers, following a 16-year pattern of 5-7%. Pescatarians, those who eat fish, but not meat, came in at 4%, while flexitarians, those who primarily follow a vegetarian diet with occasional meat consumption, constituted the fastest growing segment at 19%.

Flexitarians gained 9 percentage points compared to 2019. During the same period, meat eaters lost 14 points. Reasons most cited by flexitarians for their choices include health concerns perceived to be associated with red meat, and the use of antibiotics, hormones and chemicals. As the swing voters of the industry, 31% of flexitarians cite a focus on quality over quantity, and 30% say they sometimes make their consumer choices to save money.

The issues affecting consumer choice often overlap. And all are influenced by cost, with premium prices sometimes inhibiting people from fully acting on their beliefs. Still, nearly all consumers value transparency by brands and retailers when making their decisions. “Information such as this study helps guide American Lamb Checkoff priorities,” says Gwen Kitzan, American Lamb Board chairman.

Overall, 76% of shoppers feel meat should be part of a healthy, balanced diet, an increase from 64% in 2020. Only 67% of flexitarians agree. Low carb diets continue to be popular, and consumers want protein highlighted with in-store marketing.

The importance of meat in the diet seems to change with age. Younger consumers are less interested. The survey showed 79% of Boomers say meat belongs in a healthy, balanced diet. Gen X registered 80%, older Millennials 76%, younger Millennials 71%, and only 66% of Gen Z agreed.

The percentage of consumers who recognize meat as an important nutrient source declined from 82% in 2015 to 75% in 2021. When making what they consider to be healthful meat and poultry purchase decisions, 30% say they avoid second helpings and 18% cut portion size.

For many, their choices are closely connected to the environment. If they can’t afford the quality meat they want, they will buy less, rationalizing that buying plant based products instead is good for both the planet and makes them feel good about themselves.

Transparency fosters trust and 55% of surveyed consumers think it is important for grocery stores and meat/poultry brands to provide information on how and where livestock was raised and processed; that’s 70% for flexitarians.

The report says 44% of consumers believe the meat/poultry they buy comes from humanely treated animals; 16% say they do not, and 40% responded that they don’t know. As for the information they receive about the topic, 39% of surveyed consumers say they receive enough; 35% say they do not. When asked to define animal welfare, 60% say it involves access to outdoors and handling during slaughter, 58% mention the amount of living space, 57% cite the type of food an animal eats and 55% say the avoidance of growth hormones/steroids.

The planet is the second greatest influencer of meat choices, with 60% of respondents saying they try to do what is best for the environment. They appreciate retailers’ and brands’ efforts to decrease food and packaging waste, and energy conservation with measures like closed door meat cases.

For the Power of Meat report from the Meat Conference, contact rae@americanlamb.com.