Home / Kansas / Considerations for the herd when showing cattle 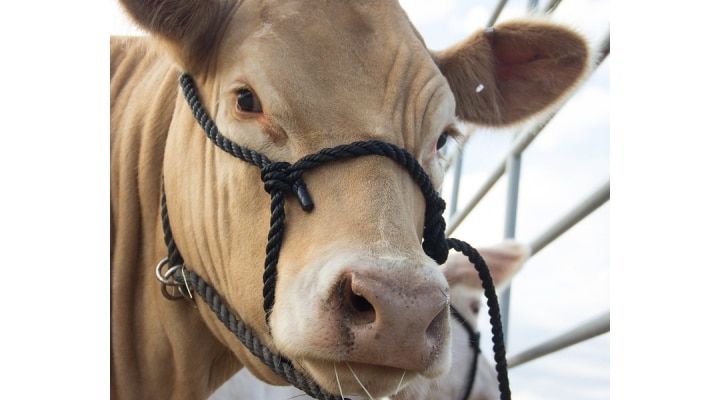 As producers work with cattle daily over the summer, it is important to check them for such contagious conditions as ringworm and warts. (Courtesy Photo)

MANHATTAN, Kan. — For 4-Hers that show beef cattle, summertime means daily rinsing and brushing of the cattle and time spent in the barn halter breaking the show string. Those close interactions with the animals also allow the cattle to be monitored for two common conditions – ringworm and warts, according to veterinarians at Kansas State University’s Beef Cattle Institute.

“As we approach county fair season, we need to give those animals the attention they deserve so we can catch and treat those conditions early,” said veterinarian Bob Larson.

Ringworm is a contagious fungal infection that can easily spread to other animals as well as humans, according to veterinarian Brian Lubbers.

“Ringworm appears as circular patches of lost hair and can range from large patches that cover a high percentage of the animal to very small dime-sized patches,” Lubbers said. “The most effective treatment for this is a topical therapy such as an iodine solution.”

He said it takes time for the hair to grow back after treatment.

Much like ringworm, warts are a contagious virus that can impact the animal’s ability to participate in a livestock event, Larson said.

“Oftentimes these can be slow growing skin lesions that appear in multiple places on the animal’s body,” Larson said. He advises producers to have them removed as soon as they are noticed so that there is time for the animal to heal before the fair.

Along with treatment of the condition, Lubbers cautioned that when animals have active cases, anything that touches the animal can help transmit the fungus/virus.

“If you see either of these conditions in one animal, make sure you are disinfecting the halters, clippers, brushes, etc., so that it isn’t inadvertently passed to another calf in the show barn,” Lubbers said.

K-State veterinarian Brad White added that wood posts can also spread the disease because animals often rub up against them.

Once the cattle return home from the livestock show, the veterinarians recommend isolating the show cattle from the rest of the herd for a period of time.

“Cattle that have been to shows have been exposed to germs from other herds and so it is especially important to keep them away from the pregnant females in the herd when you bring them home,” Larson said.

The two viruses that the young cattle can unknowingly pick up are BVD (bovine viral diarrhea) virus and IBR (infectious bovine rhinotracheitis).

“Oftentimes IBR and BVD will cause a minor respiratory disease in a young show animal, but can cause several cows to abort if those show animals get turned out with the pregnant cows right away,” Larson said. “Instead, treat them like any new animal entering the herd by isolating them for a 30-day quarantine.”

For more information on this topic tune into the BCI Cattle Chat online.