Home / DelMarVa / Considerations for 2021 cicada season
A new user experience is coming! We'll be asking you to login to your Morning Ag Clips account March 1st to access these new features.
We can't wait to share them with you! Read more here. 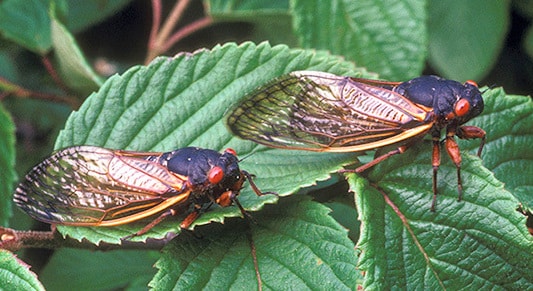 Every 17 years, the underground development cycle is completed for the Brood X periodical cicada. They will step away from feeding on below-ground roots and begin to push their way through to the surface once the soil temperature reaches a stable temperature of 64 degrees. (Courtesy Photo)

BELTSVILLE, Md. — The cicadas are coming!

For some, that means a summer of noisy mating calls and days full of the red-eyed insects landing in your hair or on your clothes. For others it means free bait to catch that prize-winning fish, or preparation for a season of delicacies – think chocolate-covered or deep-fried cicadas. Whatever your response may be, there is so much to learn about these unique insect species.

Every 17 years, the underground development cycle is completed for the Brood X periodical cicada. They will step away from feeding on below-ground roots and begin to push their way through to the surface once the soil temperature reaches a stable temperature of 64 degrees. The good news is that this insect poses no threat to us humans. They don’t bite and they don’t sting. Instead, they are known to leave quite a cluttered mess outside your front door or on the bottom of your shoe due to the way they shed their exoskeleton as they re-emerge into the world. This minor annoyance is overshadowed by the unique fact that this biological event only occurs in the eastern United States.

The Smithsonian’s National Collection of Insects partners with the USDA-ARS’ Systematic Entomology Lab (SEL) to track the geographical spread of each brood, as well as the timing of the species’ emergence. There are 15 active broods across the eastern USA occupying distinct geographic areas and with either 13- or 17-year lifecycles, and Brood X is considered one of the largest. USDA-ARS Scientist Stuart McKamey works within the SEL and has extensively studied other cicada species that damage coffee or sugarcane crops in tropical countries.  Research has shown, however, that in the United States, periodical cicadas only cause serious damage to young shrubs and trees.

“When large numbers of cicadas insert eggs in a branch with their saw-like egg-laying structures, the branches can be killed,” said Dr. McKamey. “For large trees this is like a natural pruning, but young shrubs are at risk of dying. The best way to protect our yards is to lay a ¼ inch netting over young shrubs, which is available commercially.” This easy-to-use method protects young trees and shrubs from egg-laying female cicadas.

McKamey also explains that male cicadas send a mating call to the female cicada by vibrating a drum-like organ at the base of its abdomen. In turn, the female will respond with a wing-flick that may sound similar to what we hear when we snap our fingers.

“If you snap you fingers outside during the cicada onslaught, you may end up with male cicadas flocking onto you,” McKamey said.

There are actually three species of 17-year periodical cicadas that will emerge together this year. They look almost the same to us, but the males of each species have a different mating call so they can connect with the females of the right species. Once the cicadas decide to mate with one another, the female will lay her eggs within slender branches of plants and trees. When the eggs hatch, the juvenile nymph will fall to the ground, burrow into the soil, and grow for another 17 years.

And then the cycle will repeat itself all over again.