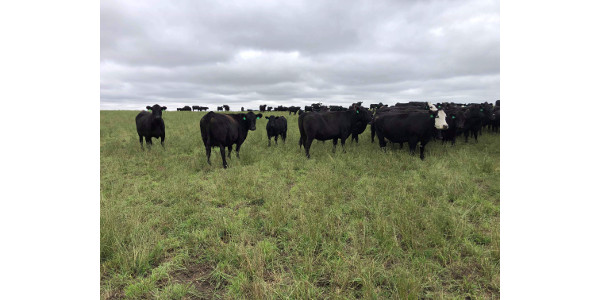 FARGO, N.D. — With forage production abundant in most areas of North Dakota, producers may be using options to extend the grazing season, including stockpiled pasture, hay regrowth and warm- or cool-season annuals.

Bloat can occur any time that cattle are grazing large quantities of highly digestible forage. Gases produced through the fermentation of forage are trapped in the rumen, putting pressure on the lungs and nerves, which affects the animals’ breathing. Pastures that contain 50% or more legumes such as alfalfa or clover present a bloat risk, as do volunteer canola and small grains.

The incidence of bloat tends to be greater early in the day, following a rain or after a frost. The risk is greatest in the first three to five days after a killing frost, but the best option is to avoid grazing for at least a week. This risk will decrease after the top half of the plant has dried down. Best management practices include:

If possible, provide cattle with access to other grazing, such as a permanent pasture. Providing a poloxalene block prior to and during grazing and placing hay bales in the field for grazing are additional management considerations.

Bloat also is a risk for cattle grazing crop aftermath or standing grain crops. High grain intake by cattle that have not been adapted properly can lead to bloat, founder or death. If volunteer grains matured to seed formation or mature grain is present in a field, grain overload from selective grazing could be a problem.

Block suggests producers scout fields before turning cattle out to determine how much grain is present, or consider using strip grazing to limit access and/or adapt cattle to grain a week or so prior to grazing to help manage this issue.

Grass tetany is a potentially fatal condition in beef cattle caused by a magnesium (Mg) and calcium (Ca) deficiency combined with high levels of potassium (K). Although most producers associate grass tetany with grazing immature cool-season grasses in the early spring, cattle can be affected by tetany when consuming lush fall regrowth in grass pastures or annual cereal forages. This situation is less common in North Dakota because the mineral profile of fall regrowth is not exactly like new spring growth; however, being aware of the possibility of a problem in the fall is important.

Tetany also may occur during the winter, when cattle are consuming a diet based on grass, alfalfa or annual forages harvested for hay. Forages that contain less than 0.2% Mg and greater than 3% K represent a potential tetany risk.

Block recommends testing a representative sample (about 10% of the bales from each lot of forage) using a hay probe and submitting the samples for forage analysis.

“Challenging weather conditions during harvest could have a variety of negative implications on hay quality this year,” she notes. “Producers should consider laboratory analysis for crude protein, neutral detergent fiber (NDF), acid detergent fiber (ADF) and mineral content at a minimum.”

To prevent tetany, producers should consider supplementing their cattle’s feed with a mineral containing 8% to 12% magnesium. Most mineral supplements contain magnesium oxide, which is unpalatable and may need to be mixed with grain or molasses to encourage consumption. If available, magnesium sulfate also is a good source and may be more palatable.

Other potential issues that can occur in cover crops and small grains include prussic acid poisoning, nitrate toxicity and sulfur toxicity (polioencephalomalacia or PEM). Brassicas in particular carry a high risk of multiple toxicities and should not constitute more than 70% of the diet. For more information about grazing cover crops, check out https://tinyurl.com/FallGrazingCoverCrops.

“It is important to understand that nitrates and prussic acid are two separate issues and are not directly related to each other,” Block says.

Prussic acid (also known as hydrogen cyanide or HCN) mainly is a concern with sorghums and sudangrass, while pearl and foxtail millet typically do not cause issues. Toxic levels most commonly are associated with frost because freezing ruptures the plant cells and releases cyanide gas.

After a killing frost, released HCN will dissipate within a week to 10 days. New growth from frosted or drought-stressed plants is palatable but also will be dangerously high in cyanide. Leave a stubble height of at least 6 inches and do not graze regrowth until it is 18 inches tall.

Nitrate-accumulating crops include small grains, millet, brassicas, corn, sorghum and sudangrass. Rangeland or pasture weeds such as pigweed, Russian thistle, lambsquarter and kochia also are nitrate accumulators. Reduced growth in annuals during the fall may slow conversion of soil nitrogen to protein and amino acids in the plant, causing high levels of nitrate to accumulate.

Dangerous levels of nitrate occur several days after a light frost but typically decrease within 10 to 14 days if conditions improve and the plant starts actively growing again. However, unlike prussic acid, nitrate levels do not decrease after a killing freeze. When plants die off, nitrogen uptake by roots will cease, but nitrate that is in the plant at that time will remain because no further photosynthesis will take place.

Most NDSU Extension offices offer a “Nitrate QuikTest” that can be used to determine presence or absence of nitrate prior to grazing or haying. For baled hay, the best option is to use a hay probe to collect samples and analyze them for nitrate content.

“A variety of options are available for extending the grazing season into the fall and making efficient use of available resources,” Block says. “Awareness of potential issues and attention to grazing management will minimize losses and optimize success. Contact your local NDSU Extension agent for more information about potential toxicity issues and grazing management strategies.”