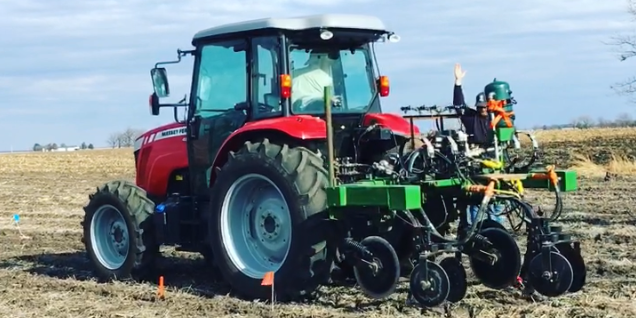 According to a new study from the University of Illinois, the effectiveness of fall-applied anhydrous ammonia depends on the soil. This photo shows the specialized fertilizer applicator used in the study. (Photo courtesy of Kelsey Grieshiem)

URBANA, Ill. — Fall-applied anhydrous ammonia may not fulfill as much of corn’s nitrogen needs as previously assumed. According to a new study from the University of Illinois, the effectiveness of the practice depends on the soil.

The study used a “tagged” form of ammonia to determine how much of the nitrogen in corn grain and plant material comes from fertilizer, versus nitrogen supplied naturally by the soil.

“There have been a number of studies to compare yields with fall- versus spring-applied ammonia or other treatments. But our study is different because we are tracing the nitrogen from the fertilizer ammonia into either the grain or the whole corn plant above ground. That’s what makes this unique,” says Richard Mulvaney, professor in the Department of Natural Resources and Environmental Sciences at Illinois.

Mulvaney and his graduate student, Kelsey Grieshiem, used a stable isotope of nitrogen, 15N, in formulating the tagged ammonia. They applied it at a typical rate of 200 pounds per acre in mid- to late November in six Illinois fields in 2016 and 2017.

The fields differed in soil type and crop rotation. Four were Mollisols, which Mulvaney describes as prairie soils: rich, black, and productive. The two others were Alfisols, or timber soils, which are typically poorer in comparison to Mollisols. Two of the Mollisol fields were cropped to continuous corn, while the rest were a under a corn-soy rotation.

After the fall ammonia application, the researchers looked for the 15N isotope in corn plant and grain material at harvest in the following growing season. Any nitrogen not tagged with the isotope was assumed to have come from natural nitrogen stores in the soil, rather than from the fertilizer.

“Just as we expected, the poorest soil showed the highest uptake efficiency while the richer soils were much lower,” Griesheim says. “On average, only 21% of the nitrogen applied was recovered in the grain, ranging from 34% at the poorest Alfisol to 12% for the richest Mollisol.

“Farmers apply ammonia in the fall thinking they’ve supplied nitrogen to their corn crop for the coming year. But based on our results, most of the fertilizer nitrogen will not be taken up by the crop.”

If it were up to Mulvaney, he would recommend nitrogen applied as a side dressing, which delivers the fertilizer when the plant is actively growing. “You’re fighting time with fall applications,” he says. “You’re counting on keeping the nitrogen in the soil for six months before the next crop needs to take it up.”

The study also evaluated the effectiveness of N-serve (nitrapyrin), a nitrification inhibitor commonly applied in the fall with anhydrous ammonia. This product is meant to slow down the microbial conversion from ammonium, which is immobile in the soil, to nitrate, which, during a wet spring, can leach away or be lost as a gas.

“Nitrapyrin has long been used in conjunction with fall-applied ammonia with the motive of increasing uptake efficiency. We didn’t find that to be the case at all. And in fact, in our study, the only significant effect of the product was a yield decrease on continuous corn,” Mulvaney says.

Should farmers apply anhydrous ammonia in the fall?

Griesheim says, “Considering the low uptake efficiencies observed in our study, farmers should think twice before putting their nitrogen on in the fall. Low fertilizer recoveries mean less return from the farmer’s fertilizer investment and a higher risk of environmental pollution.”

Adds Mulvaney, “To make matters worse, farmers have been taught for decades that they should follow yield-based recommendations, such that the soils that generate the highest yields need the most fertilizer. But that inverts reality. The highest yielding soils need the least fertilizer. Our research supports that.”

The article, “Nitrogen-15 evaluation of fall-applied anhydrous ammonia: I. Efficiency of nitrogen uptake by corn,” is published in the Soil Science Society of America Journal [DOI: 10.2136/sssaj2019.04.0098]. Authors include Kelsey Griesheim, Richard Mulvaney, Tim Smith, Shelby Henning, and Allen Hertzberger. The research was supported by BASF.