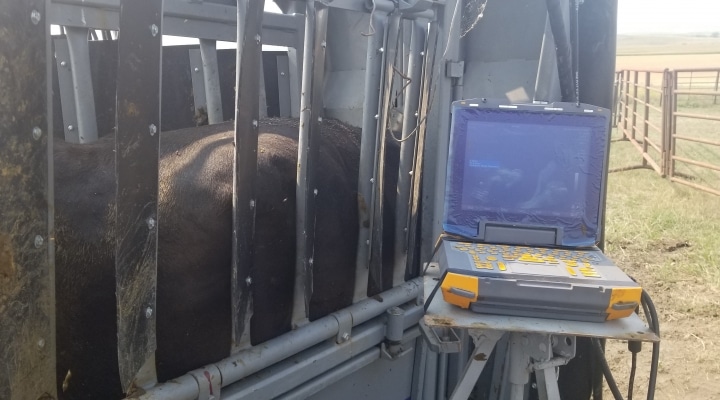 An ultrasound is one way of checking cows' pregnancy early. (NDSU Photo)

“Many North Dakota producers already have culled old cows, cows that lost their calves and even cow-calf pairs, yet further reductions in stocking rates may be necessary,” says Janna Block, livestock systems specialist based at North Dakota State University’s Hettinger Research Extension Center. “Early pregnancy testing is one way to identify and cull unprofitable open cows or cows that conceived late in the breeding season.”

Pregnancy testing for most spring-calving herds typically is carried out in late summer or fall in conjunction with weaning or preconditioning calves. However, cows can be checked as early as 28 to 30 days after the end of the breeding season to allow for more timely management decisions.

Blood-based pregnancy tests are another option for pregnancy diagnosis that can be used within 60 to 90 days post-calving and 25 to 30 days post-breeding, depending on the type of test used. Test kits can be purchased from several commercial sources, and blood samples can be collected on the ranch by the producer.

Because the pregnancy-associated glycoproteins (PAGs) that are used to detect pregnancy remain in the cow after calving, a previous pregnancy can provide interference if the recommended sampling period is not followed.

Costs for pregnancy testing typically are similar among methods and range from about $3 to $6 per head, with some potential for local pricing differences.

“Each method of pregnancy testing has associated advantages and disadvantages,” says Gerald Stokka, NDSU Extension veterinarian and livestock stewardship specialist. “An experienced rectal palpator can identify reproductive issues such as uterine infections and the presence of cycts or other issues. Ultrasound can be used to estimate fetal age and detect the presence of multiple embryos.

“In addition, it can be used to determine fetal sex when performed around 55 to 60 days after conception,” he adds. “Blood-based tests can be collected and submitted by producers, but it may take a week or more to receive results.”

Zac Carlson, NDSU Extension beef cattle specialist, reminds producers that internal body tissues are delicate, so technicians should take care to avoid rough palpation or ultrasounds that can result in damage and potentially impact the cows’ pregnancy status. He says that while the majority of embryonic losses occur prior to day 28 of gestation, additional losses may occur up to day 60.

What also is important to remember is that stressors such as handling, shipping and heat stress can increase the risk of losses for cattle in early pregnancy. Regardless of the method being used for pregnancy evaluation, working cattle quietly, keeping them calm and avoiding working them in extreme temperatures to reduce risks is vital.

When an early pregnancy test is performed, an additional evaluation may be necessary before winter feeding programs begin to identify cows that may have lost pregnancies.

“Regardless of the management decisions made after pregnancy checking occurs, early diagnosis will add to a producer’s bottom line by identifying nonproductive females and reducing associated feed and production costs,” Block says. “Early pregnancy testing also can identify reproductive issues within a herd and allow for a more thorough and effective response. Producers should consult their veterinarian to make informed decisions about what method is best suited to their individual operation and goals.”