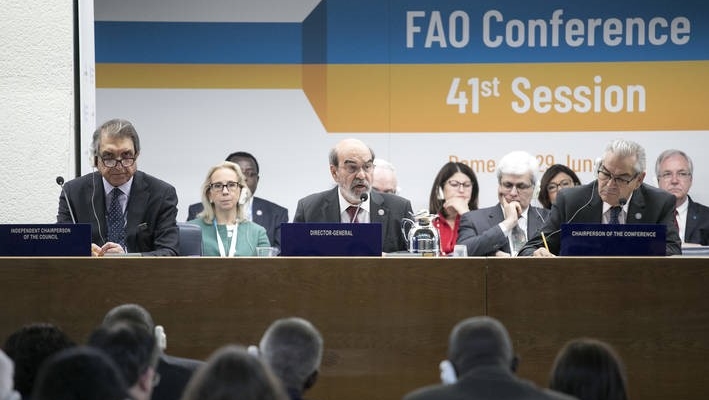 ROME — A new spirit of consensus, the embracing of partnerships and a new cross-disciplinary teamwork approach to tackling food security challenges are now hallmarks of how the Food and Organization of the United Nations (FAO) operates, Director-General José Graziano da Silva told member states today.

Those institutional innovations have boosted the salience of two key policy shifts in pursuing FAO’s mandates – understanding that reducing hunger is more about access than production, and grasping that building resilience to shocks is cheaper and more effective than trying to provide help after disaster strikes – Graziano da Silva said.

He made the remarks at the opening of the FAO Conference, the UN agency’s highest governing body.

The Director-General is wrapping up eight years at the helm of FAO whose members on Sunday elected Qu Dongyu from China to be its next chief.

First, he noted that a consensual approach to the budget has been fostered, replacing an “adversarial” culture pitting developed and developing countries against each other. It is now time to increase investments in FAO, which risks becoming overly reliant on volatile voluntary contributions, “he added.

Second, FAO is now open to partnerships, and since 2013 has signed almost 200 agreements with the private sector, civil society, academia and research institutions. Practical collaboration with other UN agencies has also increased, which has proven to be “surprising easy, because FAO’s own strategic framework and related objectives coincide neatly with the Sustainable Development Goals,” Graziano da Silva said.

Third, FAO has rolled out five Strategic Programme Teams to better harness expertise across disciplines to address complex challenges in agriculture and rural development in an era when climate change, biodiversity, gender and nutrition are growing as priorities. This process of breaking down silos will “gather momentum as more examples of success emerge,” he said.

Reflecting on his tenure at FAO, Graziano da Silva highlighted that “innovative policies can very quickly gain wide acceptance”, even with relatively little investment in their formal promotion.

Governments today largely agree that targeted social protection programmes are a key part of hunger-fighting programmes, and hopefully will soon come around to the view that fostering healthy nutrition is an urgent policy imperative, he said. Too many people are “eating badly – particularly ultra-processed food and artificial products”, he said. National and international rules are urgently needed to help food safety focus move beyond food-borne illness to contrast all forms of malnutrition, he added.

A paradigm shift is also needed to promote transformations associated with the growing awareness that the Green Revolution has reached its limits. “I hope that we have succeeded in debunking the popular view that industrial-scale farming, with a heavy dependence on energy-intensive technologies, can guarantee long-term world food security,” Graziano da Silva said, emphasizing that the future of food and agriculture will be knowledge and technology-intensive and must come mainly from family farmers.

Expressing concern about the “emergence of inward-looking nationalist policies in many countries,” Graziano da Silva emphasized: “Many of the issues relating to feeding the world and managing natural resources sustainably have transnational, regional and global dimensions that cannot be tackled by countries working alone.”