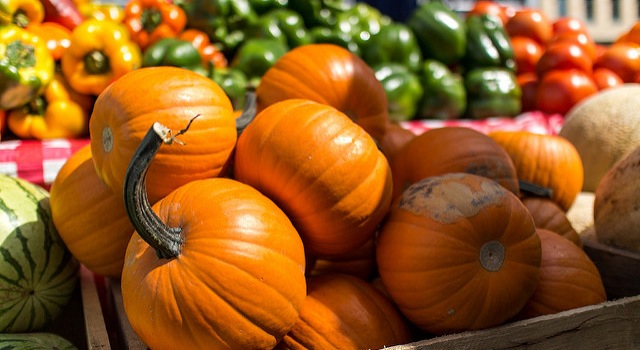 Inspections conducted this season by the Department of Agriculture at farmers markets across the state found compliance with the 2-year-old Connecticut Grown program is still lacking. Of the 72 growers inspected, 45 were properly posting signs bearing the Connecticut Grown label and the name and address of the farm where the product was produced. (Patrick Kuhl, Flickr/Creative Commons)

HARTFORD, Conn. (AP) — State agricultural officials are considering whether to begin fining farmers and growers that repeatedly fail to comply with state regulations meant to ensure fruits and vegetables advertised as being grown in Connecticut are actually grown in the state.

Inspections conducted this season by the Department of Agriculture at farmers markets across the state found compliance with the 2-year-old Connecticut Grown program is still lacking. Of the 72 growers inspected, 45 were properly posting signs bearing the Connecticut Grown label and the name and address of the farm where the product was produced.

“This year was educational,” said Dr. Bruce Sherman, director of the agency’s Bureau of Regulatory Service. Sherman said warning letters were sent to some farmers not in compliance. For next year, he said it is likely repeat offenders will be fined $100 for each violation, although the enforcement procedure remains unclear.

“We have to take it on a case-by-case basis,” he said, adding how some farmers just haven’t gotten used to the labeling system yet.

The Connecticut Grown program was enacted in 2015 to address the issue of someone at a farmers market claiming an item was grown in Connecticut, but it was not. Vendors can often charge a premium price for fruits or vegetables grown locally. Therefore, advocates contend it’s in the best interest of the consumer and the grower that the produce is properly identified as grown in Connecticut.

“If you have the regulations in place, then you establish an equal playing field for all of the attendees at a market,” said Sue Pronovost, president of the Connecticut Greenhouse Growers’ Association and the executive director of the Brass City Harvest farmers market in Waterbury. She said it’s only fair when one farmer buys produce from another farmer when they fall short on a particular product, they identify where that produce originated.

Pronovost said that situation is more common than a farmer trying to advertise vegetables grown in another state as Connecticut-grown.

“There are people that will try to do that,” she said. “In Connecticut, it’s a very small population.”

Don Tuller, a seventh generation farmer in West Simsbury and president of the Connecticut Farm Bureau Board of Directors, said the rules at farmers markets can be tricky. Some require farmers to only sell produce they’ve grown. But he said the Farm Bureau encourages farmers to play by the rules of the different farmers markets and the Connecticut Grown program, adding how customers want to know if the produce is grown locally.

Tuller said those farmers who work hard to follow the rules probably would like to see the Department of Agriculture fine repeat violators.

Pronovost said she believes some farmers still are not complying with the Connecticut Grown rules because they don’t have the time to read newsletters from the Department of Agriculture. A busy farmer is “the last person on the face of the planet who is going to be sitting by their computer,” she said.

But Pronovost said information is getting out, crediting the department for holding a recent educational forum about the labeling law and the state’s inspection process for those who organize farmers’ markets, as well as growers.

Market masters, the people who run the more than 125 farmers’ markets across Connecticut, were reminded at this month’s forum about how growers must submit “crop plans” to the state and each market where they sell their products. Such plans detail what crops a particular farm is growing. They’re used by the state to investigate complaints.

Sherman noted that most complaints made this past season about farmers selling out-of-state produce were determined to be unfounded.