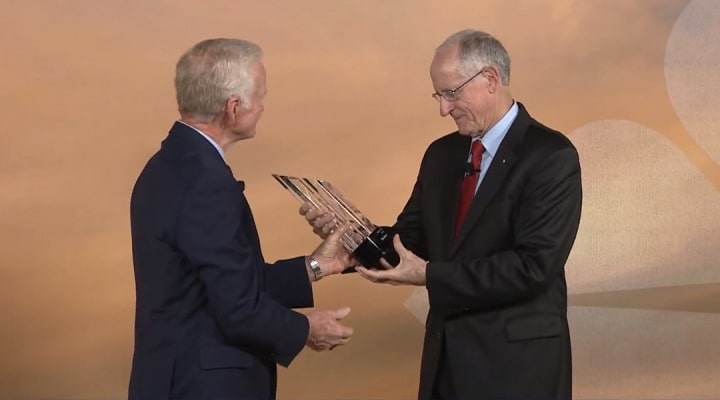 AUSTIN — Former U.S. Rep. Mike Conaway was inducted into the Farm Credit Bank of Texas (FCBT) Academy of Honor at the 2021 FCBT Annual Stockholders Meeting on June 16. The award establishes a $25,000 scholarship that will be presented in Conaway’s name to students attending a university of his choice.

Established in 1968, the bank’s Academy of Honor recognizes outstanding individuals for their service and contributions to agriculture and to Farm Credit. To date, 62 people have been inducted into this prestigious group.

Conaway represented the 11th congressional district of Texas for 16 years, beginning in 2005. For six of those years, he was chair or ranking member of the House Agriculture Committee. He did not seek reelection in 2020.

“Throughout his eight terms in the U.S. House of Representatives, Rep. Conaway was an advocate for agriculture and rural communities, and a friend to Farm Credit,” Jimmy Dodson, FCBT board chair, said in presenting the award.

“As chair, he presided over the writing and passage of the farm bill in 2018. In so doing, he was the first chair in nearly 30 years to introduce and pass a farm bill in the same year — virtually an unheard-of task,” Dodson said.

An Army veteran with a background in accounting, banking and petroleum, Conaway was appointed to the House Agriculture Committee, the House Armed Services Committee and the Permanent Select Committee on Intelligence. He also served as the deputy Republican whip.

“We appreciate Congressman Conaway’s leadership, guidance and strong voice for farmers and ranchers over the years. And while we will miss having him on the House Agriculture Committee, we take pleasure in inducting him into the Farm Credit Academy of Honor — a distinction well-deserved,” Dodson said.

Farm Credit Bank of Texas is a cooperatively owned wholesale bank that provides financing for agriculture and rural communities. The Austin-based bank is a part of the Farm Credit System, a nationwide network of rural lending co-ops that was established in 1916.