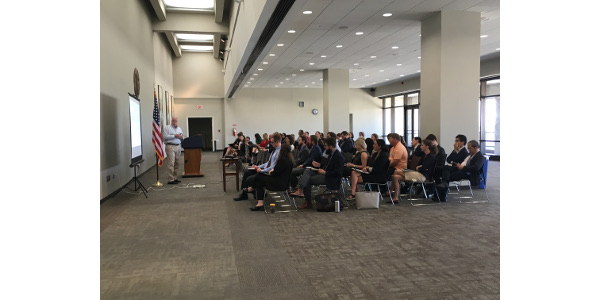 Mark Stephenson presented at a Dairy Economics & Policy educational event Sept. 12 for the US Senate in Washington, DC. (Courtesy of WFU)

WASHINGTON, D.C. — Over the past four years, 7,339 dairy farms have gone out of business in the United States. Dairy farmers nationwide are facing their fourth straight year of negative income, due to dairy markets that chronically fail to successfully align the milk supply with profitable demand.

Dr. Mark Stephenson, a dairy economist and director of the Wisconsin Center for Dairy Profitability, shared encouraging results from recent analyses of various programs that could improve dairy farm profitability. One example shared was a Market Access Fee Program, which would set an allowable percentage of growth in production, with market access fees per hundredweight paid by farms that exceeded growth in a given year. The research was conducted last winter by Stephenson and Charles Nicholson, an adjunct associate professor at Cornell University, and analyzed two options: a program with fixed allowable growth and market access fees, and another linked to the milk-feed price ratio. The research looked at the impact the program would have had if implemented in January 2014 to 2020, as had been proposed during the 2014 Farm Bill process. Stephenson noted it also took into account trade flows within the global dairy supply chain.

“This research was motivated by concerns about low and variable milk prices and farm incomes,” Stephenson said, noting, “A number of dairy industry groups have expressed interest in programs to manage growth in U.S. milk production.”

Also worth noting, Stephenson said, is that total USDA expenditures on the MPP-Dairy and Dairy Margin Coverage programs during 2014 to 2020 would have decreased by as little as $470 million and up to $1.2 billion, depending on the program.

Time to move forward
Wisconsin Farmers Union President Darin Von Ruden said he was pleased with turnouts at the hearings, which drew legislators and legislative staff from offices across the United States. “This is the next step toward policy reform that is necessary if we want a future for family dairy farms,” Von Ruden said. “In the past year, Dairy Together has been organizing across the country with organizations and farmers joining the call for change, but now we need forward momentum on policy that will provide long-term sustainability. Farmers don’t want government handouts, they want a system that provides market stability and a fair price for their products.”

Paul Adams, who milks 500 cows on his organic dairy farm, was among the dairy farmers who traveled to Capitol Hill to share their stories. Adams said the capital city felt like another world compared to his farm on the outskirts of Eleva, WI. “The economic distress we’re seeing in rural Wisconsin isn’t evident there,” he said. “They have no clue the struggles we are facing out here, which is why it is so important that we went and shared exactly what’s happening. But, more importantly, we laid out a clear path for how our legislators can help improve the situation for dairy farmers — and in a way that would be at no cost to the government.”

Adams said the dairy trade aid package and other government dairy payments scarcely make a dent in the money he has lost due to market volatility in recent years.

“I’m pleased that supply management is being seriously discussed,” said former dairy farmer and WFU District 8 Director Rick Adamski of Seymour. “It’s unfortunate that we’re in the place where we are today — we still have a long way to go to fix this broken system.”

Learn more about the movement for fair prices for family farmers at www.dairytogether.com.

Wisconsin Farmers Union is a member-driven organization committed to enhancing the quality of life for family farmers, rural communities, and all people through educational opportunities, cooperative endeavors, and civic engagement. Learn more at www.WisconsinFarmersUnion.com.