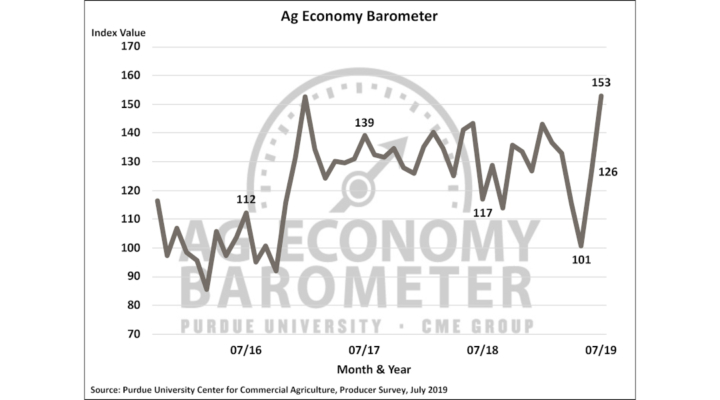 WEST LAFAYETTE, Ind. and CHICAGO — The Purdue University/CME Group Ag Economy Barometer reading jumped to 153 in July, up 27 points from June, and up 52 points from May. Improving crop conditions after an extraordinarily wet planting season, combined with a late spring/early summer crop price rally, boosted farmer sentiment. This improvement occurred despite the fact that many producers were in the midst of filing prevented planting crop insurance claims and wondering about the size of the USDA’s 2019 Market Facilitation Payments (MFP). Results are based on a survey of 400 agricultural producers across the U.S. conducted from July 15 through July 19, 2019, which was prior to USDA’s announcement of 2019 MFP payment rates.

A big driver of sentiment was producers’ improved expectations for current economic conditions. The Index of Current Conditions, a sub-index of the ag barometer, increased 44 points in July to a reading of 141, marking the largest one month improvement since data collection began in October of 2015. The barometer’s other sub-index, the Index of Future Expectations, also increased, up 18 points from June, to a reading of 159 in July.

“The Corn Belt is continuing to see better crop conditions and that has farmers, at least momentarily, breathing a sigh of relief. However, the agricultural economy is still in flux,” said James Mintert, the barometer’s principal investigator and director of Purdue University’s Center for Commercial Agriculture. “The impact of prevented planting on 2019 corn and soybean acreage and prices along with the outcome of trade talks with China remain unknown.”

As a result of the late planting season, and the possibility of large prevented planting acreage not captured in their June Acreage report, USDA announced that they would re-survey farm operations in nearly all major corn and soybean states during July to better estimate actual planted acreage of both crops. The results from that survey will not be available until mid-August.

Producers were also asked whether they feel now is a good or bad time to make large investments in their farming operations. In July, the Large Farm Investment Index, improved to a reading of 67, up 25 points from June and 30 points from May. This increase marked both the largest 2-month improvement in the index since data collection began in fall 2015 and the highest reading for the index since February 2018. Sentiment also spilled over into their expectations for increased land values. Short-term, the percentage of producers expecting land values to increase in the upcoming 12 months jumped from just 10% in June to 21% in July, the highest percentage expecting an increase in values since February 2018. Long-run, 53% of producers said they expect values to rise over the next 5 years compared to 45% who felt that way in June and 39% in May.

Read the full July Ag Economy Barometer report at https://purdue.ag/agbarometer. This month’s report includes insights into whether producers expect a swift and favorable resolution to the ongoing trade dispute with China. The site also offers additional resources – such as past reports, charts and survey methodology – and a form to sign up for monthly barometer email updates and webinars. Each month, Dr. Mintert also provides a short video analysis of the barometer results, available at https://purdue.ag/barometervideo.

For more articles about the farm economy, click here.