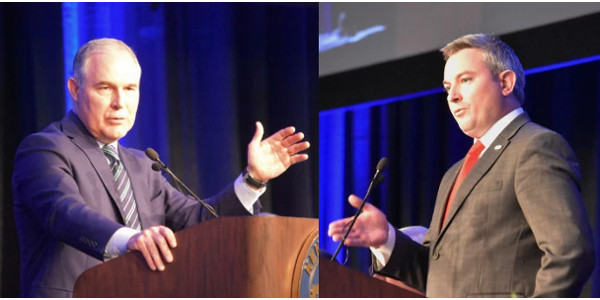 (A version of this article first appeared in The Farmer’s Pride, December 7 issue)

FRANKFORT, Ky. — The Commodity Luncheon at the Kentucky Farm Bureau annual meeting usually provides an opportunity for farm leaders to hear an update from the Commissioner of Agriculture. As promised by the agenda, Ryan Quarles was on-hand to supply those remarks.

What the audience wasn’t expecting was to hear from the administrator of the Environmental Protection Agency, Scott Pruitt.

KyFB president Mark Haney explained that Pruitt had been planning to visit the meeting, but his schedule is extremely busy and subject to unexpected change, so the appearance was a well-guarded secret until the administrator slipped through the side door of Louisville’s Galt House ballroom.

This was Pruitt’s second visit to his home state of Kentucky in less than two months. He and U.S. Senator Mitch McConnell came to Hazard on October 9 to announce a rollback of the Obama-era clean power plan to the Eastern Kentucky coal industry. He then traveled to Bourbon County to talk with farm leaders about plans to address government over-reach in the previous administration’s Waters of the United States (WOTUS) plan.

Pruitt told the Farm Bureau audience that his agency’s focus on environmental matters will not overlook employment and economic growth.

“I’m looking at those across the room that are our first conservationists,” Pruitt said. “You care about the land that you farm, the water that you drink and the air that you breathe. We need to look at you as a partner and not an adversary.” Pruitt said he feared that the agency has not held that belief in recent years.

Pruitt said a replacement of the WOTUS rule can be expected by mid-2018.

The administrator’s remarks came on the heels of a pledge by Kentucky Commissioner of Agriculture Ryan Quarles to continue the progress being made by his department, even in the face of a constricting budget.

The success of agriculture in the Commonwealth is critical, according to Quarles, due to the dominant role it plays in our economy. He said that, whether on the local, state, or federal level, Kentucky “fights above its weight class.”

“A recent survey showed that 200-thousand jobs in Kentucky are directly or indirectly related to agriculture,” Quarles pointed out. “We have a $45-billion economic impact, and when you consider our state’s total Gross Domestic Product is $190-billion, it kind of reflects that no matter where you go in this state agriculture plays a big role in economic development.”

Quarles closed his remarks by thanking Kentucky Farm Bureau for its support of and partnership with his agency, and with what has recently become his mantra: “If you like to buy, buy Kentucky Proud and if you like to eat, thank a Kentucky farmer.”