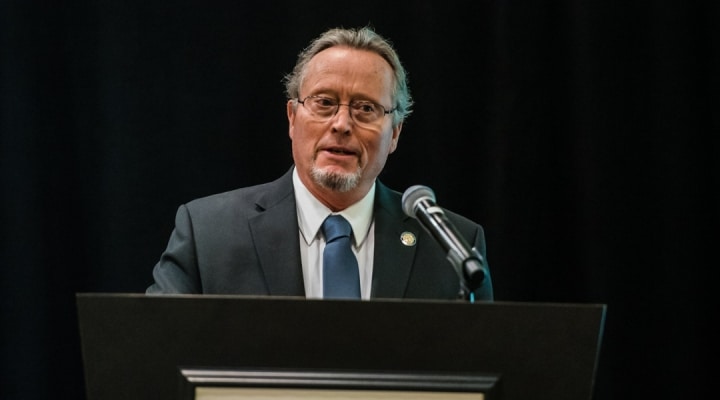 To celebrate the season and kick-off the NYS Maple Weekends in the Upper Hudson region, NYS Commissioner of Agriculture Richard Ball will be attending a ceremonial tree tapping on Friday, March 18th at 10:00 A.M. (Photo By Eric Jenks)

GREENWICH, N.Y. — New York’s maple season has arrived! Sap is flowing and producers throughout the state are collecting and starting to boil to make pure maple syrup. To celebrate the season and kick-off the NYS Maple Weekends in the Upper Hudson region, NYS Commissioner of Agriculture Richard Ball will be attending a ceremonial tree tapping on Friday, March 18th at 10:00 A.M. This year’s ceremony will take place at Brower Road Sugarhouse located at 150 Brower Road in Gloversville. This annual event is hosted by the Upper Hudson Maple Producers Association (UHMPA).

Fellow sugar makers and any who are interested are invited to attend. In addition to the tree tapping, Brower Road Sugarhouse co-owner Jim Deming hopes to have a boiling demonstration and fresh maple syrup to taste if able.

Brower Road Sugarhouse is looking forward to hosting the event this. Mr. Deming shared, “We are happy to host the tree tapping ceremony this year! Every year the event is a good time for all with the chance to see fellow sugar makers and promote maple products in general.”

Brower Road Sugarhouse has been in operation since 2007. Co-owners Jim Deming and Jake Cichy are both lifelong sugar makers. Jim started at age five and Jake began when he was a teenager. After having had individual operations, the pair decided to join forces to create Brower Road Sugarhouse. What started out as a smaller 300-tap operation has grown to around 3,500 taps across three sugarbushes. In addition to making pure maple syrup, sugar, cream, and other products, Brower Road Sugarhouse seeks to educate on the maple making process by participating in Cornell Cooperative Extension’s Ag in the Classroom program. Brower Road will be participating in this year’s NYS Maple Weekends. To find out more about their operation and offerings check out their website at www.browerroadsugarhouse.com.

This year’s New York State Maple Weekends are March 19-20 and 26-27. During these weekends maple producers will be opening their sugarhouses for tours, tastings, demonstrations and more. To find a participating sugarhouse from the Upper Hudson region, take a look at the new and improved UHMPA website at www.upperhudsonmaple.com.

Game of Logging courses this spring