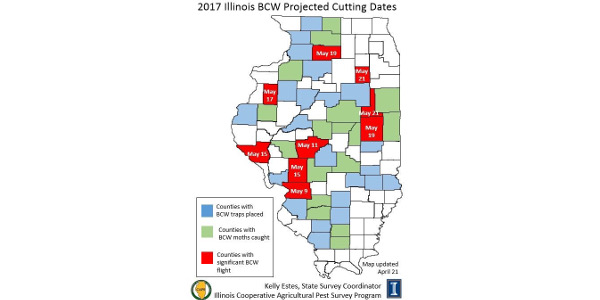 Estes has now projected the earliest cutworm feeding will start May 9th in Madison County. That's near St. Louis. Her projections move north from there with the passage of time.

URBANA, Ill. — Farmers across Illinois will soon need to scout their cornfields for the black cutworm. Todd Gleason has more on the pest and projected cutting dates.

Black cutworm moths ride the southerly winds into the state of Illinois and then lay their eggs in cornfields. The hatched larvae then feed on the stem of seedling corn plants. The eat all the way through it, cutting it off. That’s why it is important to monitor black cutworm moth flights into the state using traps says entomologist Kelly Estes from the Illinois Natural History Survey.

Kelly Estes : We’ve had reports of significant moth flights, which is more than eight moths (captured) over the course of a two-day span. We use this to set a biofix. From this bio-fix, we can use degree days to predict when black cutworm larvae will be in an area and large enough to cut those plants like you described earlier.

One cutworm can feed on as many as four corn plants – up to 15 inches in height – over its lifetime. They feed at night and burrow into the ground during the daylight hours. Conditions that favor black cutworm outbreaks include later tillage and planting dates, reduced or no-till fields, and or fields were large weed populations exist or were controlled late.

Damage is likely to occur when weed hosts are destroyed and larvae begin feeding on corn. Small larvae feed on plant leaves. Early cutworm feeding can be identified as small irregular holes in the leaves of corn plants. The larvae feed above ground for about the first quarter of their lives, or until they are approximately half an inch long.

Estes is now projected the earliest cutworm feeding will start May 9th in Madison County. That’s near St. Louis. Her projections move north from there with the passage of time.

Estes : Say, like, I-72 across with projected dates from May 11th through the 15th and then as we progress into northern counties, like Warren or Grundy and even as far north as Lee County, with projected cutting dates from May 17th through May 21st. So, as we see delayed planting in several areas across the state, we could potentially have small corn in those areas right about the time we expect to see larvae present.

Illinois farmers should begin to scout corn fields for black cutworm larvae now. They’ll need to scout five locations in each field, looking at about 250 plants total. The cutworm is black to gray and about an inch and half long when fully grown and looks a little greasy. A post-emergence rescue treatment is needed when 3% of the plants are cut, and larvae are still present.