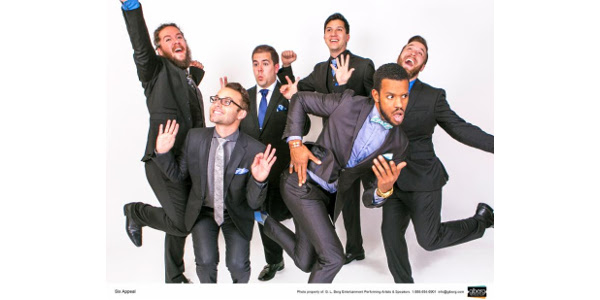 Six Appeal, a long-time favorite of many fairgoers, is a world class vocal ensemble infused with impeccable comedic timing and the energy and vitality of a rock band. (Courtesy of Clay County Fair)

SPENCER, Iowa — The Farmers Bank Stage will bring nine days of quality entertainment to the Clay County Fair Sept. 9-17, just a portion of the $180,000 in free entertainment that will be offered to fairgoers as part of the Fair’s Centennial Celebration.

“The entertainment at the Farmers Bank Stage will be a perfect blend at the 2017 Fair,” said Fair Manager Jeremy Parsons. “It will be a mix of great Fair favorites along with unbelievable new acts that will quickly become Fair favorites.”

Fairgoers will enjoy a variety of music and entertainment to kick off the Fair, Sept. 9-11, with performances by the talented a capella group Six Appeal, and Fantastick Patrick, a comic and juggler.

Fantastick Patrick brings something fresh and exciting to the world of live entertainment with a show full of comedy and incredible tricks. From juggling fire, swords, and balls, to an awesome yo-yo act, plate-spinning, and free-balancing massive objects on his face, Fantastick Patrick will entertain all ages.

Six Appeal, a long-time favorite of many fairgoers, is a world class vocal ensemble infused with impeccable comedic timing and the energy and vitality of a rock band. Swearing off instruments, the award-winning vocal band Six Appeal takes you on a journey that spans decades of music, performing classic oldies, current chart toppers, and catchy original tunes – all sung a cappella.

Sept. 12-14 brings polka and a band of merry sidekicks to tickle your funny bone.

Kris and the Riverbend Dutchmen is an upbeat and energetic polka band headquartered near Mankato, Minnesota. The band blends traditional German, Czech, and Bohemian Polka with a unique style and energy, uncommon in many old time polka bands.

Laugh with ventriloquist David Malmberg and his sidekicks; comedy, voice tossing, story telling, and music will leave you laughing for weeks. The wisecracking antics of the lovable Simon Spencer, America’s grouchiest farmer, Leonard Cribble, and the totally clueless Lars Gunderson, provide one sizzling laugh after another.

Rounding out the entertainment for the Farmers Bank Stage Sept. 15-17 are Jared Sherlock, an award winning illusionist, and the variety duo The Memories.

Jared Sherlock, a comic magician, combines modern magic and clean comedy entertainment. Audience members joining Jared onstage, high-energy comedy juggling, and a contemporary performance of the infamous bullet-catch using a paintball gun are just a few of the things you might encounter during the show.

For more than 40 years The Memories have entertained audiences across the country. With their unique harmonies and great songs, this Wisconsin-based duo is made up of Warren Petryk and Tim Stevens. Another Fair favorite, The Memories continue to deliver a show has been described as “Music, Laughter, and Wonderful Times.”

Entertainment sponsored by Farmers Bank does not end with the free stage performances. The fireworks that light up the night sky after each U.S. Cellular Grandstand concert event would not be possible without Farmers Bank participation.