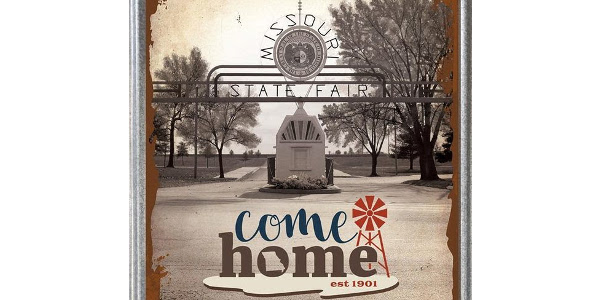 A one-third scale replica of the West 16th Street Historic Main Gate will debut at the 2017 Missouri State Fair.

SEDALIA, Mo. — A one-third scale replica of the West 16th Street Historic Main Gate will debut at the 2017 Missouri State Fair. Many fairgoers have mentioned over the years the desire to have their photo taken at the Main Gate. The gate’s location and high traffic make it difficult (and unsafe) to do so. Fairgoers are encouraged to stop by and take pictures with the fairground’s new addition, located just inside the Centennial entrance on State Fair Boulevard. It will be a permanent structure on the grounds available for photo opportunities year-round. You can post your picture to social media and share it with the hashtag #MSFMainGate for a chance to win tickets to the 2018 State Fair.

The 16th Street Historic Main Gate was added to the fairgrounds in 1939. Arthur P.J. Schwarz and Harvey King designed the gate made up of three ticket booths spanned by steel arch work. The gate was repaired and repainted in 2002 and again in 2016, and still serves as the well-known gateway to the Fair. The new replica model was built and donated in part by WB Young Company, Inc. of Marshall, MO, who also built the Farm Family Tribute exhibit in 2015.