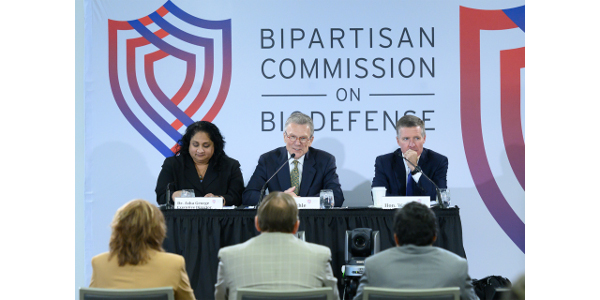 The Bipartisan Commission on Biodefense, which includes former Senate Majority Leader Tom Daschle (center), spotlighted the threats to the nation’s agricultural systems during its Nov. 5 meeting at CSU. (Courtesy of CSU)

FORT COLLINS, Colo. — If a singular message emerged from a Nov. 5 meeting of the Bipartisan Commission on Biodefense, it was that threats to our nation’s agricultural systems are real, they are urgent, and – as was repeatedly stated – they are existential.

The meeting, held at Colorado State University’s C. Wayne McIlwraith Translational Medicine Institute, gathered a host of top U.S. government dignitaries together with veterinary, public health and military experts to candidly discuss catastrophic biological risks to all components of agriculture. Such risks include the threat of disease outbreaks among livestock and crops that feed billions of people and animals across the U.S. and overseas.

As the hosting institution, CSU’s land-grant heritage was front and center throughout the day’s events, which included opening remarks from CSU System Chancellor Tony Frank. CSU Vice President for Research Alan Rudolph served on a panel, along with representatives from the University of California, Davis, and South Dakota State University, to outline roles and responsibilities of land-grant universities in contributing to national security.

“We serve a critical role in helping our region understand new threats, and to help prepare and respond to continued threats from disease,” Rudolph said. “We do that through our integrated mission of education, research and service, and through direct engagement with our communities.”

Rudolph underscored CSU’s geographic position in the Colorado Front Range, close to 29 federal laboratories with which university researchers often collaborate. Among those federal facilities is the Department of Agriculture’s National Laboratory for Genetic Resources Preservation, which he called the “Fort Knox of agriculture.”

Land-grant ecosystems like CSU are spawning new companies involved in the supply chain across the agricultural sector, Rudolph continued. He told the commission that the university is actively cluster-hiring top researchers in sustainable agriculture disciplines and predicts that the Front Range will have 30 to 40 new scientists focused on livestock health. CSU also maintains BioMARC, a biological manufacturing and academic resource center that produces vaccines, diagnostics and cell therapeutics.

CSU Vice President for Research Alan Rudolph (left photo) served on a panel that covered the roles and responsibilities of land-grant universities in contributing to national security.

Daschle, who led the day’s discussions alongside Wainstein and commission Executive Director Asha George, remarked that the fifth anniversary of a devasting avian influenza outbreak in the American Midwest was drawing near.

“Our government, at all levels, should actually be commended for acting as swiftly as they did at the time,” Daschle said. “But that disease ultimately resulted in the loss of 50 million birds across 21 states. By the time the virus ceased to spread, it had caused $3.3 billion in economic damage. Such devastation is avoidable.”

Among the bipartisan commission’s response to that outbreak was a 2017 report, “Defense of Animal Agriculture,” that contained recommendations to address agricultural threats like the 2015 avian flu. The report urged a “One Health” approach to addressing such issues: “All efforts to prevent and plan for biological events impacting humans must therefore integrate with animal and environmental health initiatives.”

The meeting included several panels on topics including response and recovery, and surveillance and detection. Former Secretary of Agriculture Tom Vilsack appeared via a video recording and offered remarks on the critical nature of the commission’s work.

Among topics touched on throughout the day: the issues that have prevented a comprehensive national system for animal disease traceability; the ever-increasing importance of public-private partnerships; and the need to incentivize independent producers to quickly report suspected incidence of disease or adopt new technologies.

The day was capped by comments from Rep. Joe Neguse of Colorado’s Second Congressional District, which includes Fort Collins. Neguse stressed a commitment to working across partisan lines to achieve common goals in the area of agrodefense.

“Colorado State University has been at the forefront of battling infectious diseases worldwide and promoting human and animal health for decades,” Neguse said. “I am grateful to be surrounded by so many bright minds who are leading the work in biodefense right here in the Second District.”

During the meeting, Rep. Joe Neguse of Colorado’s Second Congressional District stressed a commitment to bipartisanship in the area of agrodefense.