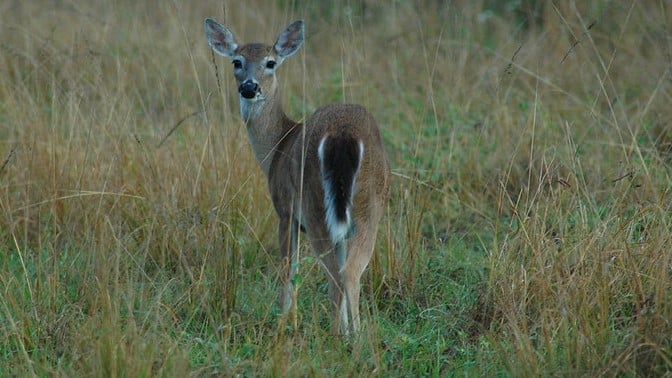 CWD is an infectious, degenerative disease of cervids that causes brain cells to die, ultimately leading to the death of the affected animal. (Florida Fish and Wildlife, Flickr/Creative Commons)

WASHINGTON — The U.S. Department of Agriculture’s Animal and Plant Health Inspection Service (APHIS) is making available up to $3.5 million for state and tribal governments to carry out research and management activities to help combat chronic wasting disease (CWD) in farmed and wild deer and elk populations.

State departments of agriculture, state animal health agencies, state departments of wildlife or natural resources, and tribes are eligible to submit funding proposals that further develop and implement CWD management, response and research activities, including surveillance and testing. The funding can also be used to support education and outreach activities to increase awareness about the disease and how it spreads. APHIS will give priority to states and tribes that have already detected CWD and implemented CWD monitoring and surveillance programs or that propose to create control programs.

CWD is an infectious, degenerative disease of cervids that causes brain cells to die, ultimately leading to the death of the affected animal. The incubation period can be long depending on species and genetic factors. Infected animals look healthy until the end stages of the disease, making them difficult to distinguish from healthy animals. Animals infected with CWD can transmit the disease to other animals during the “silent” incubation period. The disease has spread widely and the limited number of tools, as well as their effectiveness, impacts the ability to effectively control the disease.

In May, APHIS held a virtual summit with state agricultural and wildlife representatives, Tribal officials and the cervid industry to discuss and develop funding priorities. Proposals may range from $50,000 to $250,000 per eligible entity. Applications will be reviewed, and funding decisions will be announced by September 30.

Specifically, these cooperative agreement opportunities will allow for state departments of agriculture, state animal health agencies, state departments of wildlife or natural resources and Tribes to further develop and implement CWD management and response activities in accordance with the following priorities:

The funding opportunity announcement will be posted on Grants.gov. Applications are due August 14, 2020. More information may be found at https://www.aphis.usda.gov/aphis/ourfocus/animalhealth/animal-disease-information/cervid/cervids-cwd/cervid-cwd