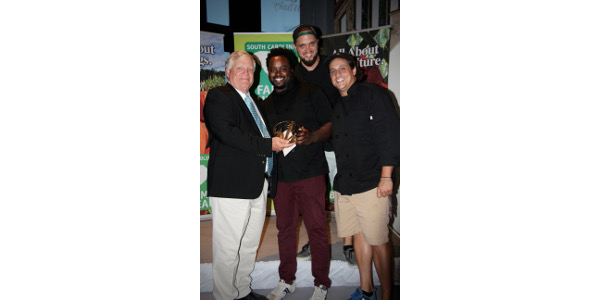 COLUMBIA — Ramone Dickerson and the crew of Columbia’s 2 Fat 2 Fly, was selected the 2017 Top Chef by a panel of judges at the South Carolina Farm Bureau (SCFB) Federation’s annual Palmetto Palate. The event took place Thursday at the historic 701 Whaley building in Columbia. Dickerson was among nine local chefs participating in the event.

Dickerson led his team to the honors with 2 Fat 2 Fly’s signature stuffed wings. The menu included smoked brisket and sharp cheddar-stuffed wings, summertime squash casserole and homemade honey-butter biscuits. Dickerson got his start in 2010 and has become a favorite staple among Midland’s residents. He and his crew have a Columbia restaurant, Wing City, and a food truck, 2 Fat 2 Fly. In 2016, Dickerson earned the title of Chef Ambassador a program of South Carolina Department of Agriculture, which highlights the talented chefs in South Carolina who incorporate creative cuisine and locally grown products in their restaurants.

“The Palmetto Palate celebrates local food grown by South Carolina farmers, which midlands chefs incorporate into tasty dishes,” said Harry Ott, SCFB President. “These are some of the best chefs in the country, and the event and excitement continues to grow each year because of that.”

Palmetto Palate pairs SC farms with leading chefs from around the state and the result is tapas-sized portions of food that perfect for sampling. Members from county Farm Bureaus across the state also made donations to a silent auction that featured items unique to South Carolina, the outdoors, cooking and local artwork.

Palmetto Palate has become a highly anticipated celebration of locally grown food, the area’s culinary artistry, and fellowship. The money raised will help support agriculture-friendly candidates for South Carolina General Assembly who recognize the importance and sustainability of agriculture in South Carolina through the Friends of Farm Bureau Political Action Committee. Agribusiness is the state’s largest industry, contributing nearly $42 billion to the economy annually and supporting more than 212,000 jobs statewide.

The SC Farm Bureau Federation is a non-profit membership organization formed to promote and preserve the work of family farmers and rural lifestyles across the state. In exchange for their annual dues and financial support of education, promotion and lobbying efforts on behalf of agriculture and family farmers, Farm Bureau members are entitled to discounts and access to a number of quality products.

The organization serves more than 100,000 member families in 47 chapters and has been around since 1944. Persons interested in supporting agricultural education are encouraged to contact their county Farm Bureau office or the South Carolina Farm Bureau Federation at www.scfb.org for additional information.