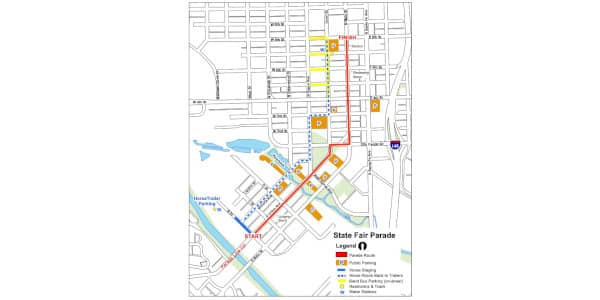 The Colorado State Fair parade, one of the oldest parades in Colorado, will take place Saturday, August 28 at 10 a.m.

PUEBLO, Colo. — “Hometown Heroes and Rodeos” could not be a more fitting theme for this year’s parade marshals.  The Colorado State Fair Parade Committee has announced former police chief, Troy Davenport as the Honorary Marshal.  In addition, Rod Slyhoff has been name Grand Marshal, in memoriam.

Rod Slyhoff served the Greater Pueblo Chamber of Commerce from 1988-2021.  He was named President/CEO in October of 1994 and served the community in that capacity until his passing.  As the President/CEO, Slyhoff grew membership from 800 to over 1300 members.  He was active in organizing many aspects of the Colorado State Fair including the Legislative BBQ. Slyhoff was incredibly proud of the Chamber’s involvement with the El Pomar Foundation Emerging Leaders Development program, which began in 2001.  The programs initiative is to cultivate diverse leadership throughout southern Colorado.

Most notably, in 1994, Slyhoff envision the first Pueblo Chile and Frijole Festival.  He grew the event from 2,500 attendees on one downtown block to over 160,000 attendees spanning six city blocks.  “Experience the Flavor of Pueblo” was created by Slyhoff to promote Pueblo, a mission he dedicated his entire career to.

Troy Davenport served his community and country for over 32 years.  In 1990, he was activated with the US Naval Reserve Unit in support of Operations Desert Shield/Storm.  When he returned from duty, he continued his career in the Pueblo Country Sheriff’s office.  He worked in the Patrol Division as a Deputy Sheriff, was a Field Training Officer and a member of the tactical team, eventually becoming name Police Chief.  Throughout his law enforcement career, he gave back to the Pueblo community by serving on multiple boards.  He was actively engaged with United Way of Pueblo County, Pueblo Child Advocacy Center, Rotary 43 and the Suicide Prevention board.  Additionally, Davenport always went above and beyond with his line of work serving on multiple assignments including but not limited to, D.A.R.E., Special Victims Unit, Adult Investigations and School Resource Officer.

The Colorado State Fair parade, one of the oldest parades in Colorado, will take place Saturday, August 28 at 10 a.m.  For more information, please call Terri Kallish at 719-542-1704.

Click the link for a map of the parade route: 2021 STATE FAIR route