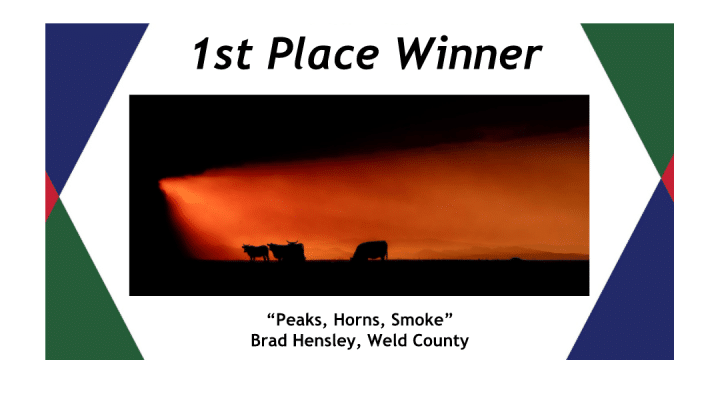 The 2020 first place winner is Brad Hensley of Longmont, with his entry titled "Peaks, Horns, Smoke." (Brad Hensley via Colorado Department of Agriculture)

BROOMFIELD, Colo. — The Colorado Department of Agriculture is excited to announce the winning photographs from its 2020 Best in Show Photography Contest. More than 100 photos were submitted through the annual contest, which invites photographers of all skill levels to capture images of Colorado’s vibrant agriculture industry in every corner of the state.

Once again, the judges were faced with the daunting task of choosing only three winners from a large pool of excellent photographs. All entries have a valuable role in promoting and helping tell the stories of Colorado agriculture and will be featured widely in CDA communications.

The 2020 first place winner is Brad Hensley of Longmont, with his entry titled “Peaks, Horns, Smoke.” Taken in Weld County last September, the winning photograph shows a dramatic image of grazing cattle silhouetted against the front range at sunset contrasted by a massive smoke plume from the Cameron Peak wildfire.

Visit the CDA website to view more of this year’s top photo entries and for information about the 2021 Best in Show contest, now underway. High-resolution images are available by contacting Ben Walther, Digital Media and Outreach Coordinator.