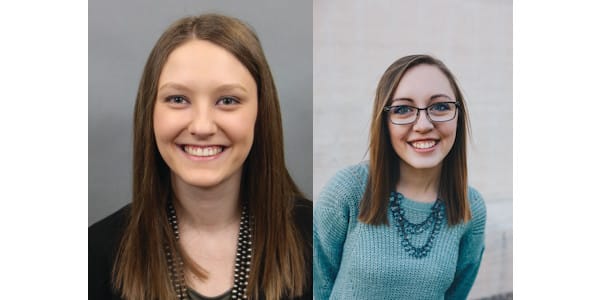 LINCOLN — The Nebraska Farm Bureau Foundation awarded the Ron Hanson Collegiate Leader Scholarship to two members of Collegiate Farm Bureau at the University of Nebraska – Lincoln (UNL) who are pursuing degrees from the College of Agricultural Sciences and Natural Resources (CASNR).

Dr. Ron Hanson, professor emeritus at the University of Nebraska – Lincoln, established the scholarship to reward students who prioritize leadership building activities while on campus.

This year’s recipients rose to the top of a strong candidate pool. Applicants were judged based on their involvement with UNL Collegiate Farm Bureau, volunteer and leadership activities, and their goals for the future.

Reitz is pursuing a degree in Agricultural Education with a minor in Animal Science. She is involved in volunteer organizations including UNL Collegiate Farm Bureau where she serves as president, Nebraska FFA Foundation, the Nebraska Human Resources Institute (NHRI), and Nebraska Farm Bureau’s Young Farmers and Ranchers Committee.  Reitz serves as a leadership mentor through NHRI for an eighth-grade student in the Lincoln Public School system. Upon graduation, Reitz plans to attend graduate school or law school in hopes of beginning a career as an agricultural educator or a lawyer specializing in agricultural issues.

Hornung is pursuing a degree in Agricultural Education with plans to return to a rural community in Nebraska and teach secondary education. Hornung is an active member of the UNL Collegiate Farm Bureau and currently serves as the vice president. Hornung also serves as the president of the UNL FFA Alumni Club, Ag Ed Club, and the Alpha Zeta Agricultural Honor Society. Hornung’s interests lies in connecting elementary education with agriculture where she will use the Nebraska Farm Bureau Foundation’s Agriculture in the Classroom Program to further her students’ knowledge of the importance of agriculture in their lives.