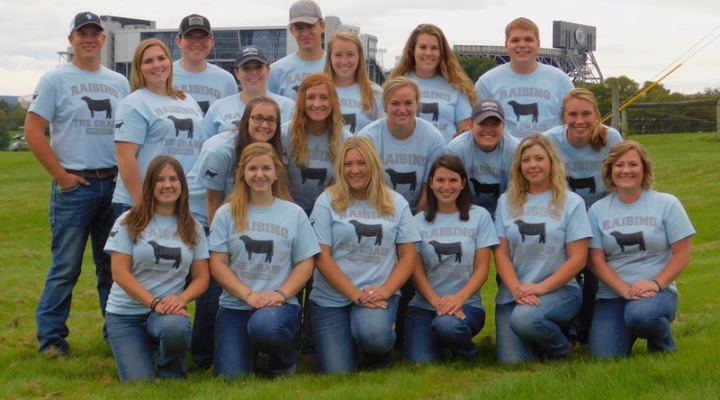 Members of the Penn State Collegiate Cattlewomen share a passion for the beef and dairy industries. (Pennsylvania State University)

“We started out as a group of women in agriculture who wanted to help more women get involved in ag, but we’ve actually opened our doors to allow men into the club as well,” said Lauren Ebel, club president. “As a group, we have a passion for the cattle industry and education. We want to improve the image of producers who work so hard to feed our families.”

Club adviser Dan Kniffen, assistant professor of animal science in Penn State’s College of Agricultural Sciences, noted that the Collegiate Cattlewomen was formed at Penn State based on the National Cattlewomen’s Association structure.

“Now that it’s a club of both men and women, the students attend the National Cattlemen’s Beef Association’s annual meeting,” said Kniffen. “This is the largest cattle event in North America, and it allows students to interact with some of the most influential individuals in the beef industry. The trade show hosts all the allied industry members and allows students to look for internship or career opportunities.”

The club, which boasts 43 active members, meets biweekly in 324 Agricultural Sciences and Industries Building at the University Park campus. Meetings begin with a recap of completed events and discussion of past activities, followed by planning for the group’s next set of activities. Guest speakers are also a big part of the meetings.

“We want to promote women in the STEM fields — science, technology, engineering and math — and agricultural industries,” Ebel said. “We invite women who work in these fields to come speak to the group about experiences and challenges they have faced.”

Club members have a variety of backgrounds and experiences. “Not everyone was raised on farms or even had much experience with the cattle industry,” Ebel said. “A lot of members joined because they like cows and they’re interested in learning more about the industry.” For example, Ebel, a senior agricultural science major with an animal science minor, did not grow up in a farming family.

“We promote both beef and dairy industries within the group so that our members have more knowledge about production, nutrition and sustainability,” she said. “That way, they can pass along their knowledge to the public and ultimately become leaders who will benefit these industries.”

The club developed “Meat-In Day,” held in March, which is one of their biggest activities. For that event, the club partners with Penn State’s Block and Bridle Club to raise awareness about the beef and dairy industries. Club members hand out donated cheese sticks, beef sticks and bologna in front of the Palmer Museum of Art and at campus dining halls. Members also distribute informational fliers that explain why animal products are important to a person’s diet.

“It’s a day to have conversation and educate the public,” Ebel said. “We meet a lot of people who have misconceptions about the agricultural industry. The event helps our members learn how to take other people’s opinions and backgrounds into consideration while having a meaningful discussion.”

The club’s newest event is Raising the Grade Cattle School, which provides a full day of activities for 4-H students. The 4-H students visit Penn State’s Beef and Sheep Center, where they participate in events such as a skill-a-thon and discussion on cattle evaluation. Students also have the chance to watch calf pulling and ultrasound demonstrations and interact with club members.

The Collegiate Cattlewomen are heavily involved in community service projects. The group has sold T-shirts to raise money for farmers affected by wildfires, and members volunteer at the Pennsylvania Cattlemen Association Jackpot Show, where they help kids in the ring with their heifers and steers and set up for the show. At the Pennsylvania Farm Show, the Cattlewomen help run a Pennsylvania Livestock Association food booth selling milkshakes and other items to benefit the club.