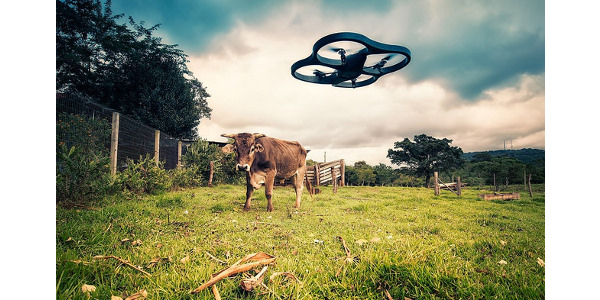 Two higher education institutions in Kansas are partnering allow students to get a degree in drone-flying. (Mauricio Lima via Flickr)

EL DORADO, Kan. (AP) — Two higher education institutions in Kansas are partnering allow students to get a degree in drone-flying.

Some high school students can take the classes offered through Butler’s Early College Aviation Academy. After earning an associate’s degree from the college, students can enter the workforce or transfer into Kansas State Polytechnic’s program.

“It’s going to be a combination of both schools delivering this together,” said Lori Winningham, vice president of academics at Butler. “So depending on which course it is, the price will depend on who’s offering it.”

Butler officials said that such a degree can lead to careers in agriculture, fire science, law enforcement and real estate.

“There’s a lot of opportunity in various industries,” Winningham said. “And so training students to be able to do and use the technology is what we were really interested in, because it’s one of those career fields that’s just about to explode.”

Educators hope is that students will eventually be able to take all four years without leaving the area.

“My hope is that K-State will bring the last two years down here within two years — because we’ll have a pipeline of students for them — so somebody could physically stay in this area is what my hope is,” Winningham said. “We haven’t gotten that far yet, but that’s where we’re hoping to go.”

— The Wichita Eagle via The Associated Press