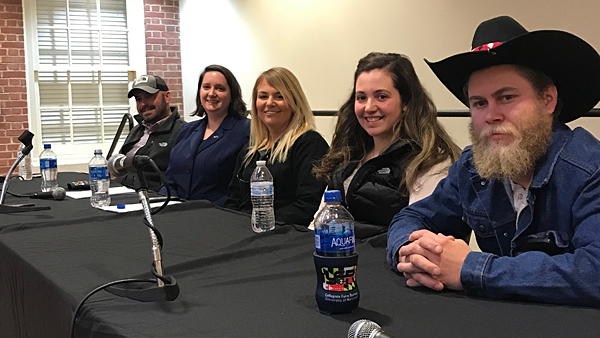 DAVIDSONVILLE, Md. — On March 27, Collegiate Farm Bureau at the University of Maryland hosted an “Ask-A-Farmer” panel in the Stamp Student Union. This event brought five farmers from across the state to the College Park campus to answer pressing questions that students had regarding the agriculture industry.

In November, the chapter received a mini-grant from the American Farm Bureau Federation to aid in the development of the chapter. The funding received was used to hold the event.

Students on campus had the opportunity to ask farmers specific questions pertaining to the industry and how it works. The objectives of the event were to expose students at the University of Maryland to farmers in the state, discuss hot topics in agriculture and correct common misconceptions regarding food production.

The farmers selected to serve on the panel were representative of the entire industry in Maryland. The panelists included David Hancock of Hancock Family Farms, Amanda Heilman of DuPont Pioneer, Ariel Taxdal of Brooms Bloom Farm, Kayla Griffith of Griffith Family Produce and Alan Eck of Mae Vue Farm. Each of the farmers represented different commodity groups; Hancock is a grain, produce and livestock farmer from Southern Maryland; Heilman sells seed to grain producers on the Lower Eastern Shore; Taxdel is a dairy farmer from Harford County; Griffith works on her family’s farm in Anne Arundel County growing produce; Eck is a poultry and grain farmer on the Eastern Shore.

“At the University of Maryland, the College of Agriculture and Natural Resources is very small in comparison to the University as a whole,” said Emily Solis, senior Animal Science major and Collegiate Farm Bureau member. “Seated in such an urban area, many of the students on campus are not familiar with food production and modern-day agriculture. This event allowed the campus community to hear from the individuals responsible for putting food on their tables.”

“Events like this allow the public to have a direct dialogue with farmers that grow their food. It is crucial in bridging the gap between consumers and producers, and I was extremely proud to be a part of it and witness the great dialogue that happened,” said Parker Welch, MFB staff member and moderator of the panel discussion.

“An event like this had not been done at the University in recent years, if ever,” said Becky Jones, chapter president. “Through this event, awareness has been brought to the Collegiate Farm Bureau chapter at the University of Maryland, which began during the Fall 2016 semester. At its start, there were a mere five members involved, but the chapter has grown to over 15 members currently.”

The chapter strives to educate and advocate for legislation regarding agriculture and other hot topics in the industry. If you would like to learn more about the Collegiate Farm Bureau chapter at the University of Maryland, email umdcollegiatefb@gmail.com.

Enroll in MaternalPlus and be rewarded

Ag groups team up for So. Md. loan program