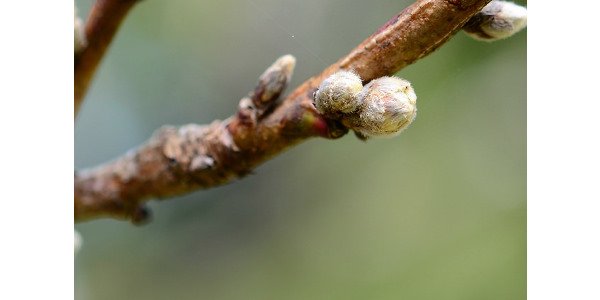 Kenny Barnwell, who grows around 150 acres of apples and 5 acres of peaches, said snow doesn't hurt the apple trees, but Monday's low temperatures hurt his peaches. (slgckgc via Flickr)

HENDERSONVILLE, N.C. — Henderson County farmers are worried that a forecast for cold weather this week will affect crops that began to bud thanks to unseasonably warm weather.

The Times-News of Hendersonville reports (http://bit.ly/2moQ8iA) with temperatures expected to dip into the teens and 20s on Wednesday, peach growers are especially concerned.

Trey Enloe of Lewis Creek Farms said his apples are fine after last weekend’s snow, adding that the buds weren’t out very far and at this point in the season, he doesn’t expect any damage.

Kenny Barnwell, who grows around 150 acres of apples and 5 acres of peaches, said snow doesn’t hurt the apple trees, but Monday’s low temperatures hurt his peaches.

Temperatures on Monday morning at Barnwell’s Orchard were around 25 to 27 degrees, he said. What he worries about are temperatures in the low 20s or high teens, and if those temperatures come along, certain varieties of apples that are further along, like Granny Smith, Pink Ladies, Galas and Red Delicious, will be hurt.

Barnwell also said if lows Wednesday night get down to the forecast of 21 degrees, he may be “pretty much out of the peach business.”

Steve Dalton of Fruit of the Spirit Orchard said that throughout his 11.5 acres of blackberries, about 75 percent have opened buds with green shoots coming out, mostly among early varieties. So far, Dalton doesn’t think they’ve sustained any damage, but the forecast low temperatures Wednesday night have him concerned, especially the windy conditions that will create a very low wind-chill.

Dalton said one thing he would like to see is a freezing rain so the ice could insulate the plants against the lower temperatures that would do them harm.

— Times-News via The Associated Press

Sprinkling on top of row cover