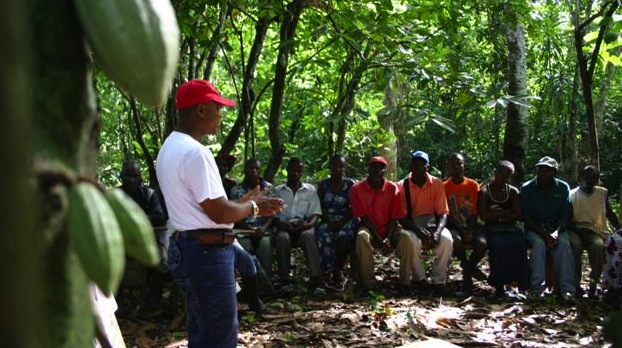 Last year an investigation by environmental group Mighty Earth found that many of Ivory Coast's national parks and protected areas "have been entirely or almost entirely cleared of forest and replaced with cocoa-growing operations." (U.S. Department of Agriculture, Flickr/Creative Commons)

Last year the governments of Ivory Coast and other top cocoa producer Ghana, along with food giants Nestle, Mars and Hershey, pledged to work together to end deforestation in the West African nations.

The president of the World Cocoa Foundation, Rick Scobey, called it a landmark decision and an “important environmental achievement.”

Last year an investigation by environmental group Mighty Earth found that many of Ivory Coast’s national parks and protected areas “have been entirely or almost entirely cleared of forest and replaced with cocoa-growing operations.” One of them, Mont Peko National Park, is home to endangered species such as chimpanzees and pygmy hippopotamuses.

Chocolate producers should “really give customers peace of mind that chocolate eating isn’t contributing to killing chimps or elephants,” said Etelle Higonnet, a campaign director for Mighty Earth. “Let’s have total transparency all the way from the bar in your hand or the Nesquik that you drink or the Nutella that you spread on your bread, down to the farm.”

On a recent patrol in Mont Peko National Park, it didn’t take long for park rangers to find cocoa growing illegally. Using machetes, the team set to work removing it.

There has been limited progress, said Kpolo Ouattara, head of the Mont Peko sector for the Ivorian Office of Parks and Reserves. “Roughly, more than 800 hectares (1,975 acres) of cocoa has been cut. Compared to the park’s total area of 34,000 hectares, that’s very little.”

While mindful of tensions that have lingered in the wake of the country’s deadly political violence in recent years, Ivory Coast has turned to security forces to evict thousands of illegal cocoa farmers from parks.

However, authorities say some have been sneaking back in to harvest trees hidden deep in the forest.

“We weren’t surprised because when we entered that area, we were well aware that (the forest) was part of the national heritage,” Ouatara said.

Still, some observers worry that local traders are willing to turn a blind eye to any illegal provenance of cocoa headed for the global chocolate market.

Scobey with the World Cocoa Foundation recommended that chocolate lovers choose brands that advertise their adherence to international standards and check brand websites for information about their commitments to environmental and human rights concerns.

“We can’t indulge in a feel-good luxury product at the expense of a huge swath of tropical rainforest,” Higonnet with Mighty Earth said.