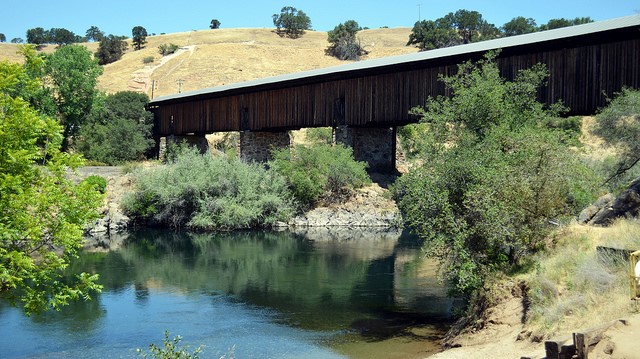 The proposal would commit much more water in the Stanislaus, Tuolumne and Merced rivers to “unimpaired flows” intended to benefit salmon and other fish. (U.S. Army Corps of Engineers, Flickr/Creative Commons)

SACRAMENTO — Urging the state water board to reject a proposal to redirect flows in three Central California rivers, a coalition of more than 50 agricultural, water and business organizations encouraged the board today to renew efforts for voluntary agreements with affected water users.

“This unified response from groups representing farmers, ranchers, and urban and rural residents alike demonstrates the impact the water board’s proposal would have, and the need for the board to explore alternative methods that would help fish without the severe human cost of its current approach,” California Farm Bureau Federation President Jamie Johansson said.

The State Water Resources Control Board is scheduled to vote on the proposal next month. It would commit much more water in the Stanislaus, Tuolumne and Merced rivers to “unimpaired flows” intended to benefit salmon and other fish.

The agricultural-water-business coalition said the proposal would have “large and unprecedented” impacts on the affected region and that “alternative pathways exist for the achievement of fish and wildlife goals.”

Well beyond the impacts to farms and water districts, the coalition said, shockwaves from the board’s proposal “are sure to ripple outward to adversely affect businesses, local governments and disadvantaged communities throughout the northern San Joaquin Valley.”

The coalition also warned that the proposal violates the state Constitution’s requirement that water be used reasonably, “by proposing the extraction of huge volumes of ‘unimpaired flows’ from otherwise legal and beneficial water users, at enormous human cost and without any reasonable and commensurate assurance of benefit to the environment.”

Describing the flow proposal as “an expedition in scientific uncertainty,” the coalition encouraged the board to support “voluntary and creative solution-finding” such as the use of functional flows—releasing just the right amount of water into rivers at the appropriate time to benefit fish—and non-flow alternatives including measures to create additional habitat or address species that prey on protected fish.

“Until every opportunity has been exhausted for creative conservation and collaboration,” the letter concluded, “a difficult and damaging regulatory path which is premised upon uncertain future fisheries successes should be avoided at all costs.”

The letter, drafted by CFBF, was signed by 54 organizations, including the Association of California Water Agencies; California Bankers Association; California Chamber of Commerce; Southern California Water Coalition; the Modesto and Turlock irrigation districts; agricultural and water organizations representing a wide range of crops, commodities and regions; and 26 county Farm Bureaus. The full text of the letter and full list of signatories may be found online at www.cfbf.com/top-issues#water, under the “Unimpaired Flow Standards” tab.