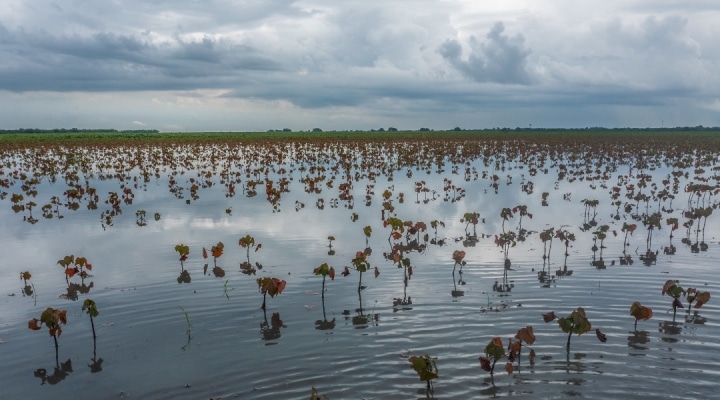 Researchers found significant changes already in the very near future, and across most important growing regions. Above: Cotton fields flooded by rain water. (Photo: U.S. Department of Agriculture, Public Domain)

POTSDAM, N.Y. — “We see that new climate conditions push crop yields outside of their normal range in more and more regions. Human-made greenhouse gas emissions bring higher temperatures, shifts in rainfall patterns, and more carbon dioxide in the air. This affects crop growth, and we find that the emergence of the climate change signal – the time when extraordinary years become the norm ­­– will occur within the next decade or soon after in many key breadbasket regions globally,” explains lead author Jonas Jägermeyr, a crop modeler and climate scientist at NASA’s Goddard Institute for Space Studies (GISS), The Earth Institute at Columbia University in New York City, and at the Potsdam Institute for Climate Impact Research (PIK). “This means that farmers need to adapt much faster, for example by changing planting dates or use different crop varieties, to avoid severe losses, but also to realize gains in higher-latitude regions.”

Maize yields down, wheat yields up

By combining a set of new climate projections and various state-of-the-art crop models, the team of researchers created the largest ensemble of future yield projections as of today. They found significant changes already in the very near future, and across most important growing regions. Maize is grown in a wide range of latitudes, including sub-tropical and tropical countries where higher temperature will be more harmful than in cooler high-latitude regions. North and Central America, West Africa, Central and East Asia will potentially see maize yields decline by more than 20 per cent in the coming years. Wheat, which grows best in temperate climates, may in turn see productivity increase on current growing areas under climate change, including areas in the Northern United States and Canada, and China.

“One effect the data show clearly is that poorer countries are likely to experience the sharpest declines in yields of their main staple crops. This exacerbates already existing differences in food security and wealth,” says Christoph Müller, co-author and also researcher at the Potsdam Institute. Importantly, wheat gains in the Global North do not make up for maize losses in the Global South. Poor countries and of course the affected smallholder farmers themselves often lack the means to procure food on the world market. The projected fundamental change in agricultural production patterns could hence in some regions become a risk for food security, while others profit.

Temperature is not the only factor relevant for future crop yields. Higher levels of carbon dioxide in the atmosphere have a positive effect on crop growth, especially for wheat. However, it could also reduce their nutritional value. Rising global temperatures also are linked with changes in rainfall patterns, and the frequency and duration of heat waves and droughts, which are risks to crop health and productivity. “Even under optimistic climate change scenarios, where societies put in ambitious efforts to limit global temperature rise, global agriculture is facing a new climate reality,” Jägermeyr said.