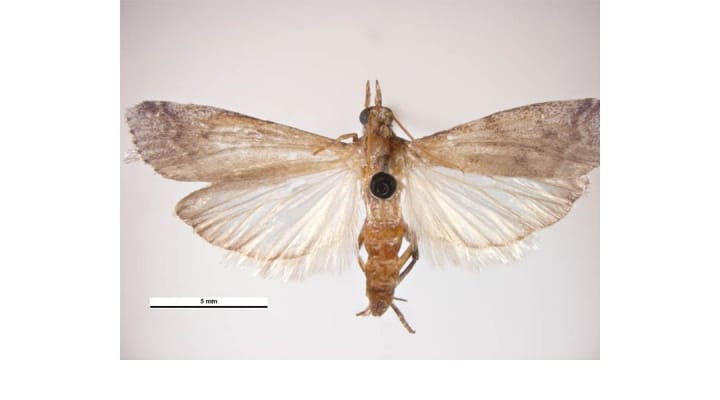 DAVIS, Calif. — Outsized wildfires, rising sea levels and disappearing glaciers are dramatic signs of climate change, but not the only ones. New UC Agriculture and Natural Resources research provides forewarning of a change that will be economically and environmentally costly to California – a fifth generation of navel orangeworm, the most destructive pest of almonds, walnuts and pistachios.

Navel orangeworm (NOW) will be more problematic in the future because of warming temperatures, UC Cooperative Extension scientists report in Science of the Total Environment.

Like most insects, NOW’s development rate, physiology, behavior and reproduction are highly dependent on the ambient temperature. When the weather warms in the spring, larvae emerge from eggs in nuts left in the tree or on the ground during the winter. They feed, develop, pupate and end their lives as moths who find a mate. Females then lay eggs in developing nuts, where larvae feeding damages the crop. Typically the pests fly three to four times per year – with more flights in areas with warmer weather.

“Warmer temperatures can result in early activity of the pests in the spring and increased activity during the season,” said Tapan Pathak, the UC Cooperative Extension climate change specialist and the study’s principle investigator.

The scientists looked at 10 climate models to determine what nut farmers can expect to face over the next 80 years and applied NOW developmental models to the changing climate. Daily maximum and minimum temperature data were obtained for 1950 to 2005, and future projections stretched to 2100.

“The fifth generation can happen in the next few decades,” said Jhalendra Rijal, UC integrated pest management advisor and co-author of the research. “The climate models suggest that spring will begin earlier. That causes insect activity to start earlier. With increased temperatures through the season, the number of days to complete a generation is less. At the end of 2050 or so, we’ll see an extra generation.”

The study focused on 23 counties in the Central Valley, from Shasta County in the north to Kern County in the south, where 1.78 million bearing acres of nut crops are planted. About two-thirds of that acreage is planted to almonds, 20% in walnuts and 16% in pistachios. The tree nut crops were valued at more than $8 billion combined in 2018, according to the California Department of Food and Agriculture.

The completion of the NOW life cycle is faster in pistachio compared to almonds and walnuts, so the potential risk of crop damage and economic loss is higher in pistachio, according to the research report. There are only a few years historically in which the models detected the fifth generation of NOW in Kern County pistachios. The occurrence of the fifth generation in almonds and walnuts was historically nonexistent, but it starts appearing in three southern counties by 2040 and eleven counties by 2100.

“In order to alleviate some of the risks related to navel orangeworm damage to nut crops, it is important to implement integrated pest management practices,” Pathak said.

IPM preventative and control measures include sanitizing the orchard during the winter by removing all the nuts on the ground and in the trees, applying synthetic reproductive hormones to limit the pests’ ability to find mates, encouraging natural enemies, judicious of least-toxic pesticides if necessary and harvesting the crop early to avoid a new generation of the pest.

The results of the research can also inform growers and pest control advisers about the potential increased threat from other pests as the climate changes.

Housing for the Harvest expands to Yolo Co., Imperial Co.