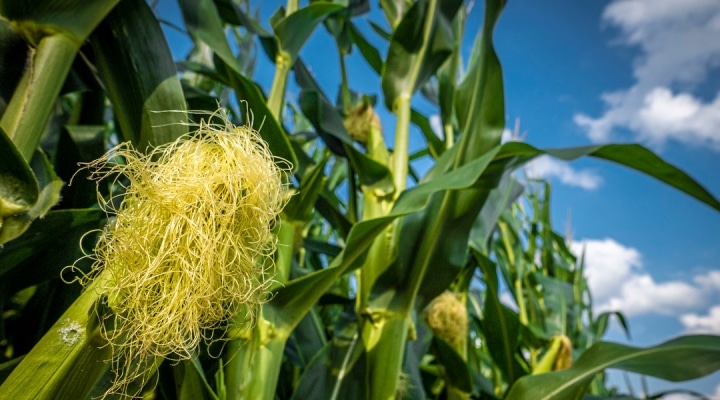 More than two-thirds of the land in the U.S. mainland is currently devoted to growing food, fuel or fiber. And about 80 percent of these agricultural lands are cultivated with just five commodity crops: Corn, soy, wheat, hay and alfalfa. (U.S. Department of Agriculture, Public Domain)

Environmental Research Letters published the research, which adds to the evidence that significant agricultural adaptation will be necessary and inevitable in the Central and Eastern United States. It is critical that this adaptation includes diversification beyond the major commodity crops that now make up the bulk of U.S. agriculture, says Emily Burchfield, author of the study and assistant professor in Emory’s Department of Environmental Sciences.

“Climate change is happening, and it will continue to shift U.S. cultivation geographies strongly north,” Burchfield says. “It’s not enough to simply depend on technological innovations to save the day. Now is the time to envision big shifts in what and how we grow our food to create more sustainable and resilient forms of agriculture.”

Burchfield’s research combines spatial-temporal social and environmental data to understand the future of food security in the United States, including the consequences of a changing climate.

More than two-thirds of the land in the U.S. mainland is currently devoted to growing food, fuel or fiber. And about 80 percent of these agricultural lands are cultivated with just five commodity crops: Corn, soy, wheat, hay and alfalfa.

Previous research based on biophysical data has established that climate change will adversely affect the yields of these crops. For the current paper, Burchfield wanted to investigate the potential impacts of climate change on cultivation geographies.

She focused on the six major U.S. crops that cover 80 percent of cultivated land in the United States: Alfalfa, corn, cotton, hay, soy and wheat. She drew from historical land-use data classifying where these crops are grown and publicly available data from the U.S. Department of Agriculture, the U.S. Geographical Survey, the WorldClim Project, the Harmonized World Soil Database and other public sources.

Using these data, she built models to predict where each crop has been grown during the 20 years spanning 2008 to 2019. She first ran models using only climate and soil data. These models accurately predicted — by between 85 and 95 percent — of where these major crops are currently cultivated.

Burchfield ran a second set of models that incorporated indicators of human interventions — such as input use and crop insurance — that alter biophysical conditions to support cultivation. These models performed even better and highlighted the ways in which agricultural interventions expand and amplify the cultivation geographies supported only by climate and soil.

Burchfield then used these historical models to project biophysically driven shifts in cultivation to 2100 under low-, moderate- and high-emission scenarios. The results suggest that even under moderate-emission scenarios, the cultivation geographies of corn, soy, alfalfa and wheat will all shift strongly north, with the Corn Belt of the upper Midwest becoming unsuitable to the cultivation of corn by 2100. More severe emissions scenarios exacerbate these changes.

“These projections may be pessimistic because they don’t account for all of the ways that technology may help farmers adapt and rise to the challenge,” Burchfield concedes. She notes that heavy investment is already going into studying the genetic modification of corn and soy plants to help them adapt to climate change.

“But relying on technology alone is a really risky way to approach the problem,” Burchfield adds. “If we continue to push against biophysical realities, we will eventually reach ecological collapse.”

She stresses the need for U.S. agricultural systems to diversify beyond the major commodity crops, most of which are processed into animal feed.

U.S. agricultural systems incentivize “monoculture farming” of a handful of commodity crops, largely through crop insurance and government subsidies. These systems take an enormous toll on the environment, Burchfield says, while also supporting a meat-heavy U.S. diet that is not conducive to human health.

“We need to switch from incentivizing intensive cultivation of five or six crops to supporting farmers’ ability to experiment and adopt the crops that work best in their particular landscape,” she says. “It’s important to begin thinking about how to transition out of our current damaging monoculture paradigm toward systems that are environmentally sustainable, economically viable for farmers and climate-smart.”

Burchfield plans to expand the modeling in the current paper by integrating interviews with agricultural policy experts, agricultural extension agents and famers. “I’d especially like to better understand what a diverse range of farmers in different parts of the country envision for their operations over the long term, and any obstacles that they feel are preventing them from getting there,” she says.