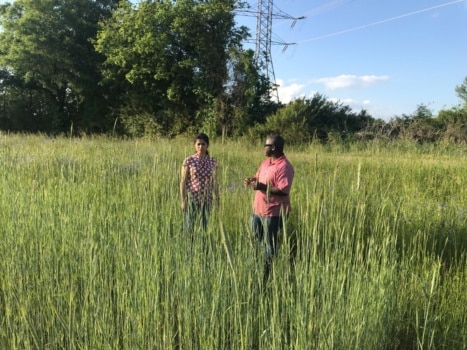 Ricardo St. Aime is a Clemson doctoral student from Port-au-Prince, Haiti, studying Plant and Environmental Sciences under the guidance of Clemson agronomist Sruthi Narayanan. His research focuses on the benefits of cover crops for subsequent cash crops. Cover crops are plants grown to keep soil covered when no cash crop is growing.

“Cover crops are important in that they can protect soil health and increase climate resilience of crop production systems,” St. Aime said. “Farmers in the southern United States grow cover crops primarily for biomass production and erosion control. We wanted to determine which cover crops would be most beneficial during the winter seasons in South Carolina.”

St. Aime is lead author on an article about the study that appears in the journal, Agronomy. Other authors are Clemson researchers Narayanan, Geoff Zehnder and Chris Talley. The study evaluated biomass production and water-use efficiency of winter cover crops in South Carolina. Cover crops used in the study included grasses, legumes and brassicas as single species or in mixtures. The amount of biomass produced is important because this biomass covers the ground and prevents water loss when cash crops aren’t planted in the soil.

“Because the 5-species mix is a combination of grasses and legumes, it could be superior when soil benefits also are considered,” said St. Aime, adding, “Growers are advised to consider the additional planning, labor and costs that may be associated with planting a mixture before choosing this for any cropping system.”

The study took place from Nov. 8, 2016 to May 10, 2018. Because South Carolina received an above-average amount of rainfall during the cover crop growing periods, St. Aime said more research is needed to verify the applicability of results during dry years.

Narayanan said the study is part of a crop-ecophysiological research program that focuses on improving the productivity of crops through economically viable and environmentally sustainable agronomic practices.

“Our goal is to develop resilient crop production systems, which can adapt to the changing climate and increasing population,” Narayanan said. “We started our cover crop projects in 2016 with an aim of optimizing cover crop selection and management for sustainable row crop production and overall system profitability in the South. The Agronomy paper provides the results of our very first cover crop study”.

For more information, see Differences in Biomass Production and Water Use Efficiency Among Seven Different Cover Crops in the Wet Winter Seasons of 2016/17 in South Carolina in the Agronomy journal.

Aime is a Latin American Scholarship Program of American Universities (LASPAU) Fulbright Scholar. The LASPAU program is a network of individuals focused on using education to bring about positive change in Latin America and the Caribbean.

The study was funded by the Southern Sustainable Agriculture Research and Education (SARE), grant number OS16-096.

Have a question? e-mail the 4-H 'Ask it Basket'