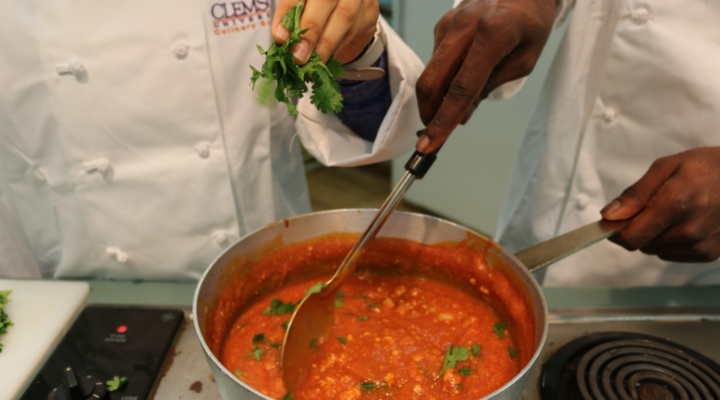 CLEMSON, S.C. — A group of students from Clemson University is learning how to use a melting pot of flavors to cook up lessons on cultural diversity.

As part of the Creative Inquiryundergraduate student research project, nutrition dietetics students reviewed and collaborated in the design of the curriculum for the South Carolina 4-HMelting Pot program, a summer culinary camp designed for youth funded by the Walmart Foundation. The Clemson students used their nutrition science knowledge to modify recipes that were adapted from a program at Pennsylvania State University by chef Anne Quinn Corr.

“This is the third year we have held this type of culinary nutrition camp,” said Pamela Ardern, South Carolina 4-H program leader. “We are so excited about the program this year. We have a new curriculum based on skills learned in the Basic Cooking Like a Chef Module from the past two summers. Our agents requested additional recipes and the Melting Pot concept emerged.”

Focusing on the cultures of Asia, Africa, Native Americans, Latinos/Hispanics and the Mediterranean, the cooking lessons encourage acceptance of the diverse cultures in America and provide a table filled with healthy and affordable food that the young campers will prepare and sample this summer.

Cooking camps this summer will be held in Beaufort, Berkeley, Charleston, Dorchester, Fairfield, Jasper, Marion, Richland, Saluda and Sumter counties. For more information about fees and how to register for the program, contact the local 4-H office in those counties. Contact information for South Carolina Cooperative Extension Service offices can be found at www.bit.ly/SCCEOffices. This program is spearheaded by Ardern and Miriam Roman, Youth Voice Youth Choice coordinator for South Carolina 4-H, with support from Condrasky, Clemson faculty and local chefs.

Preparation for the week-long culinary nutrition summer camp included a three-day 4-H Healthy Lifestyles Summit, held in January at the Center for Advanced Technical Studies in Chapin. The summit was coordinated by Condrasky and Anne Corr with assistance from the Clemson University Creative Inquiry team.

Chef Patrick Duggan, chef instructor at the Center for Advanced Technical Studies teaching kitchen, provided hands-on technical and culinary support to the 40 eager 4-H teen leaders that will man the camps in their home counties and their 4-H agents. These 10 county teams of teens and 4-H agents prepare for the summer camps early and are assisted in camp delivery by the Clemson University students for this newly designed Melting Pot program.

Clemson students championed individual cultures and cuisines in program design. Caroline Kelly, a senior food science and human nutrition major from Greenville, is a member of the group who focused on the Native American culture. Kelly said it was fun to research what they ate, as well as prepare and taste food from this culture. Native American fare includes turkey, white bean and pumpkin chili and a wilted greens salad with a hot bacon dressing. Low-fat plantain chips and a tropical fruit salad filled the bill and the beverage proved as diverse as the dishes — with warm Sassafras Tea on this menu. This tea is made from the bark of a sassafras tree. The bark is steeped for an hour and, then, poured through a strainer. Kelly said this was the first time she had tasted sassafras tea.

“Tortillas made from this recipe are sold on streets in Spain,” Harvey said. “It looks sort of like a quiche.”

There was a struggle with this recipe, which calls for 18 eggs. To make the recipe healthy, Harvey said her group reduced the amount of olive oil and decreased the number of egg yolks used.

Genna Pesce, a senior food and human nutrition major from Howell, New Jersey, was with the group who focused on Latin America. Beef and bean enchiladas, quesadillas, guacamole and fruit salsa with baked tortilla triangles highlighted the flavors of the Hispanic diaspora.

“I had never eaten enchiladas before we prepared this recipe,” Pesce said. “We baked our own tortillas to go with the fruit salsa because this is healthier than eating bagged tortilla chips. Preparing recipes like the salsa allowed high school students to practice their knife skills. This helps with confidence building because using a knife requires a lot of practice.”

“Studying Asia and preparing Asian food was really interesting,” Farr said. “Preparing foods from other countries is opening our eyes to the influences food has on a culture. Asian cuisine consists of several different cultures, each with their own unique flavors, recipes and traditions reflected in their cuisine.”

A chicken dish called Sukuma Wiki served over coconut rice and accompanied by a groundnut sauce with peanut butter, tomatoes and pumpkin highlighted the African menu. Ashley Garwatoski and Elizabeth Pinckney assisted in a review of African fare and of the Gullah tradition in South Carolina.

While studying about foreign lands is fun, South Carolina also has a different culture all its own. The Gullah people are a distinctive group of black Americans who live in small farming and fishing communities along the Atlantic coastal plain in South Carolina and Georgia.

Toney Nesbit, a junior food science major from Charleston, was also among the group of students who studied the Gullah culture. One of the dishes Nesbit and his team prepared was a Red Rice dish.

“The Gullah are a Creole people who have an island-type way of living,” Nesbit said. “This culture has an African influence and their recipes are based primarily on rice.”

In addition to these groups who studied recipes from different cultures, another group of students developed a knife skills video which will be shown during the culinary camps. The students shot, edited and produced the video, which demonstrates the correct way to use a knife.

“This video demonstrates how to use different types of knives when cooking,” said Angie Castillo, a freshman food science and human nutrition major from Easley, who helped create the video.

“We scaled down the information to a different level so campers could better understand the skills demonstrated,” said Zack Tanner, a junior from Florence who also helped develop the video.

According to Castillo, “encouraging the high school students was good because it helped them gain the confidence to teach the younger children how to safely use knives when cooking.”

Students helping students is one of the benefits of this program, Condrasky said.

“The college students teach the high school students who, in turn, teach the elementary and middle school students,” Condrasky said. “This is a great program for everyone involved. It’s wonderful to see how students at each level gain the skills they need to be successful in each of their tasks.”