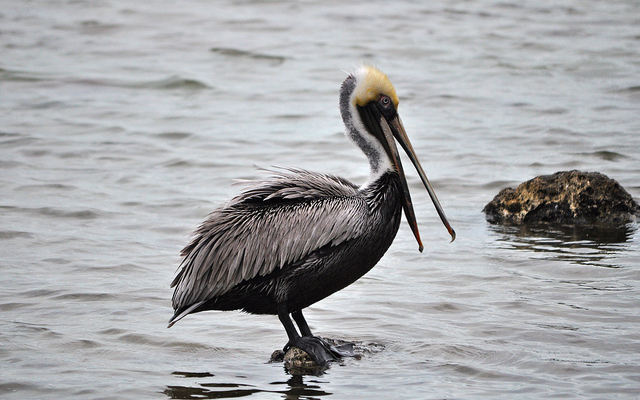 Those who observe the banded pelicans are asked to report their observation online at projectpelican.weebly.com and provide the band code, color, date and location of their observation. (Photo by Gareth Christopher, creative commons/flickr.com)

CLEMSON, S.C. — A passion for seabirds led Rochelle Streker to Clemson University to study and join a research team respected for its work with brown pelicans.

Now the graduate student research assistant is seeking likeminded Gulf Coast residents and visitors to help make a real-world impact on the birds and the coastal environment they call home.

Streker spent the summer 2017 breeding season in and around Mobile Bay, Alabama, collecting data on brown pelicans nesting on Gaillard and Cat islands and tagging 145 chicks with leg bands to track their movement after leaving the nest.

In order to do that tracking, however, Clemson’s team needs the public’s help with a citizen science opportunity to spot the banded pelicans.

“These plastic color bands can be seen by the naked eye or with binoculars. Bands are on the left leg of all the birds I worked with, and we use these bands to re-sight juveniles once they become mobile and able to fly,” Streker said. “Now that I am back in the classroom for the school year, I am looking to get the public involved in helping me continue to re-sight the birds as they fly around the Gulf.”

The chicks Streker banded this summer are among 750 young pelicans marked with green and blue plastic bands in Texas, Alabama and Florida from 2014 to 2017. The returns from the tagging efforts include one from across the Gulf of Mexico on the Yucatán Peninsula.

The work is part of a larger project funded by a $1.2 million grant from the U.S. Department of the Interior’s Bureau of Ocean Energy Management (BOEM) that began in 2012. Clemson professor and S.C. Cooperative Research Unit leader Patrick Jodice credited past graduate student Juliet Lamb (Ph.D. 2016) and research associate Yvan Satgé for laying groundwork, creating branding and establishing an online presence that led to the research coming to be known as “Project Pelican.”

Streker’s work builds on scientific data collected from pelicans to focus on restoration efforts for wildlife populations affected by 2010’s Deepwater Horizon oil spill, specifically the reproductive ecology of brown pelicans and factors of habitat that affect the survival of chicks to their fledging point.

“This project is not an oil-spill project, but after the oil spill and the response, there was a huge knowledge gap in the information about brown pelicans,” Streker said.

Clemson’s pelican research is also contributing to a larger effort, the Gulf of Mexico Avian Monitoring Network (GoMAMN), which aims to develop long-term monitoring plans for bird species of concern to provide relevant data to the restoration management community.

A primary concern in those restoration efforts is restoring habitat, and Clemson’s researchers are seeking to determine what features of habitat are significant for a particular species.

“For brown pelicans, one of the questions people wondered is: Are there differences in quality in nesting habitat that we might want to think about if we’re going to go to the efforts of doing habitat restoration?” Jodice said.

One method of restoring habitats is building islands, which the U.S. Army Corps of Engineers is quite adept at doing — with the Corps-built Gaillard Island serving as a prime example, now the largest pelican colony in the northern Gulf of Mexico.

Thus far, Streker has only received two returns on the 145 chicks she banded: one in Pensacola and another in Tampa, Florida, notable for being the first time a chick banded from Mobile Bay has been re-sighted further south in Florida than the Panhandle.

“I’m the second student to come on the Gulf project,” Streker said, “and the re-sightings already helped us better understand the fledging success and survival of juveniles, but we now want to look at movements within the Gulf and need more data for that.”

Jodice’s research team at Clemson began studying pelicans off the coast of South Carolina in 2004. After the Deepwater Horizon spill, BOEM recognized brown pelicans, in particular, were an understudied species and sought out Clemson’s team — which had already spent six years of research on the species — to aid restoration efforts.

While Streker’s efforts are focused on the Gulf, the success of Project Pelican led to BOEM providing another $1 million in Outer Continental Shelf funds through the U.S. Geological Survey for Jodice’s team to do similar work on the Atlantic coast.

“That $1.2 million grant for Gulf pelicans was made possible by many smaller scale projects conducted in South Carolina with the support of the U.S. Fish and Wildlife Service and S.C. Department of Natural Resources,” Jodice said. “It was that work, conducted by dedicated graduate students at Clemson University, that led to us being recognized as a strong research lab in this field and subsequently to our current research in the Gulf. Rochelle’s research will provide much needed information to help us manage pelicans throughout the region and hopefully lead to even more research opportunities for graduate students at Clemson University.”