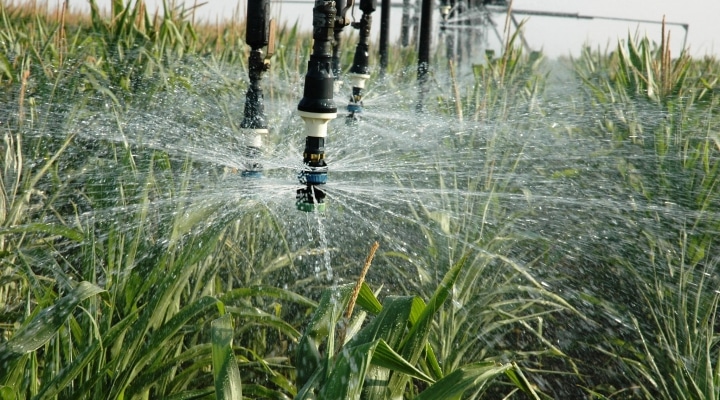 Researchers from the Clemson University Edisto Research and Education Center (REC) are working on projects they believe will help South Carolina farmers conserve water and save money. (photo by AgriLife Today, Creative Commons/flickr.com)

BLACKVILLE, S.C. – Irrigation is an important tool that likely has been used in agriculture for about as long as humans have been cultivating plants, but just how much water is enough?

Researchers from the Clemson University Edisto Research and Education Center (REC) are working on projects they believe will help South Carolina farmers conserve water and save money.

One project, funded by the state legislature, is developing software that can help take the guessing out of irrigation system efficiency. It is a GPS-based center-pivot auditing software used to calculate water-distribution uniformity in fields.

The software generates reports outlining costs of over- and under-irrigation. Using this information, farmers can assess return on investment of retrofits, adjustments and repairs.

After the software has been developed, Cal Sawyer, Clemson associate professor and Clemson Extension water resources specialist, will develop a training program to show farmers, agents and consultants how to use it.

Fleming McMaster, a crop consultant familiar with the system, said this is something South Carolina farmers “desperately” need.

“What is nice about this system is it can be tweaked based on crop rotations,” McMaster said. “It also can be used on existing systems, as well as new systems. Water is a valuable resource for all of life – humans, animals, agriculture, industry – and this system can help farmers use water more efficiently. I encourage everyone to use this system.”

“The results of this study will allow South Carolina cotton farmers to maximize irrigation water-use efficiency,” said Michael Plumblee, Clemson Extension precision agriculture specialist. “Once this research is complete, we will work with farmers to provide recommendations on how to incorporate these sensors in their current irrigation practices to help maximize their water-use efficiency as well as overall profits.

Jose Payero, an irrigation specialist and assistant professor, has developed a cost-effective irrigation management system that uses sensors to collect and transfer data over a wireless network without human intervention. The Clemson Water Management System (CWMS) is an irrigation scheduling tool that has been proven in research settings and is currently being tested on South Carolina farms. This is a $500,000, 3-year project funded by the United States Department of Agriculture Natural Resources Conservation Service (USDA-NRCS) as an On-Farm Conservation Innovation Trial.

“This system will help growers enhance water-use efficiency and increase profits while substantially reducing water and energy use, erosion and leaching of chemicals such as pesticides and soil nutrients,” Payero said. “It also will help growers apply water at optimum rates where needed.”

Gordon Mikell, USDA-NRCS conservation agronomist, said this project is part of a nationwide effort to encourage adoption of innovative approaches, practices and systems on working lands.

“On-Farm Trials projects feature collaboration between the NRCS, partners and producers to implement on-the-ground conservation activities and evaluate their impacts,” Mikell said. “What we are doing in this instance is providing demonstrations of proven irrigation conservation technologies growers can use on their farms to increase productivity and profits while decreasing water usage.”

Joe Oswald is a fourth-generation farmer at JCO Farms in Allendale County. His family farm is participating in the study. They grow corn, soybeans, cotton, peanuts, oats, rye and sorghum, as well as run 150 head of Angus cattle. Oswald has been learning about the importance of irrigation since high school when he worked with irrigation specialist Hamid Farahani at the Edisto REC.

“I believe each growing season for each farmer is different and knowing when to irrigate is critical for producing high-yielding crops,” said Oswald, who graduated from Clemson in 2013 in agricultural mechanization and business. “This year, we have received timely rains that have kept us from running irrigation as much during the hottest months. But, when this area is dry for weeks at a time it is hard to keep the soil moisture levels in the proper range. I hope this study will show the importance of using soil moisture data to determine irrigation scheduling.”

Research led by Clemson biosystems engineering professor Ahmad Khalilian, shows considerable savings in water and energy can be achieved if sensors are used for irrigation scheduling.

“We compared several irrigation scheduling methods at Clemson, either using soil moisture sensors, pan evaporation, or weather data to decide when to irrigate and how much water to apply,” Khalilian said. “The results showed that irrigation based on soil moisture sensors significantly increased crop yields and increased profits by about $35 per acre compared to the other methods.”

Kirk, Payero, Plumblee and Sawyer are members of the Clemson Cooperative Extension Service Water Resources Team. This team consists of Extension specialists, associates and agents from around the state working together to address water quantity and water quality issues in South Carolina.

These researchers and agents are working with the S.C. Department of Natural Resources and S.C. Department of Health and Environmental Control to update the State Water Plan. Part of Clemson’s efforts include the launch of the South Carolina Water Resources Center, which serves as a research facilitator and acts as a conduit for information necessary in the resource management decision-making and policy arenas of the state.

Agriculture is South Carolina’s largest industry with a $42 billion economic impact and 98,000 jobs directly supported. The agribusiness industry has grown 23% over the past decade. This industry greatly depends on the weather to survive. The South Carolina state climate summary from the National Oceanic and Atmospheric Administration (NOAA) shows temperatures in the state have increased about 0.5 degrees since the beginning of the 20thcentury. Annual rainfall has been below average during most years in the 2000s – with 12 of the last 15 years being characterized by warm season drought conditions.

Kirk’s project is supported through funding from the S.C. legislature to Clemson Public Service and Agriculture for Water Resource Research, Management and Technology.

Payero’s project is based upon work supported by the USDA-NRCS, under agreement number NR203A750013G010.