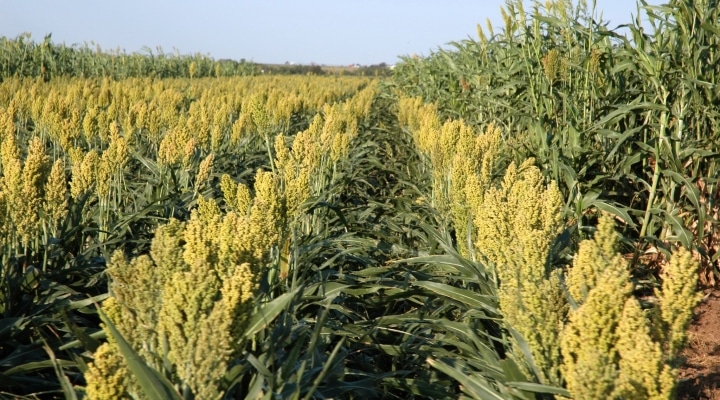 Sorghum is a major crop, but its inability to fight off the fall armyworm creates significant problems for South Carolina farmers and farmers across the southeastern United States. (photo by AgriLife Today, Creative Commons/flickr.com)

DARLINGTON, S.C. —Sorghum is a major crop, but its inability to fight off the fall armyworm creates significant problems for South Carolina farmers and farmers across the southeastern United States.

The researchers hope to unlock the mystery of sorghum’s natural defenses against the fall armyworm, as well as how the fall armyworm overcomes them. Eventually, this work could be used to develop armyworm-resistant varieties of sorghum or other environmentally-friendly pest control strategies.

Boyles will use field sites and the molecular laboratory at the Pee Dee REC to help identify pathways and specific genes in sorghum that lead to increased resistance or tolerance to fall armyworm feeding.

The fall armyworm belongs to a group known as headworms. These worms consist of three species of caterpillars – corn earworm (H. zea), fall armyworm (S. frugiperda) and sorghum webworm (Nola sorghiella). Headworms frequently lower sorghum yields by directly feeding on the grain. Using resistance to lessen the impact of these worms in sorghum will lower input costs by decreasing pesticide use.

“By introducing sorghum hybrids to the marketplace that deter or tolerate headworm feeding, sorghum producers can decrease pesticide use that will ultimately lead to increased profitability, as well as reduce their environmental footprint,” Boyles said. Fall armyworms will feed on most major crops in South Carolina including corn, cotton, soybean, peanuts, wheat, tobacco and hay. The researchers hope to determine if sorghum genes can be incorporated into the genomes of other crops to reduce fall armyworm and other headworm feeding. Information from this project will be published and disseminated throughout the scientific community so that there is a better understanding of the interaction between major crops and pests.

“Reports of fall armyworms for the southeastern United States begin to come in during late July or early August,” Coleman said. “There are multiple generations of fall armyworms each year. Each year, fall armyworm moths, carried by air tides, make their way from southern Florida, Central and South America, as well as Canada.”

Fall armyworms are susceptible to cold, making late summer/early fall prime time for their development, which means this is also prime time to prepare for prevention and treatment of invasions. The size and timing of the initial moth flights are two factors that stimulate the outbreak potential of this pest, Coleman said.

Fall armyworms are green when first born but gradually turn grayish brown. Their most distinguishing characteristic is an inverted Y on the front of the head and dark lines running lengthwise along the upper side. Fall armyworms may reach 1.5 inches long when they mature.

Anyone who believes they may have a fall armyworm problem can contact Coleman at garyc@clemson.edu, or their local Clemson Extension agent.