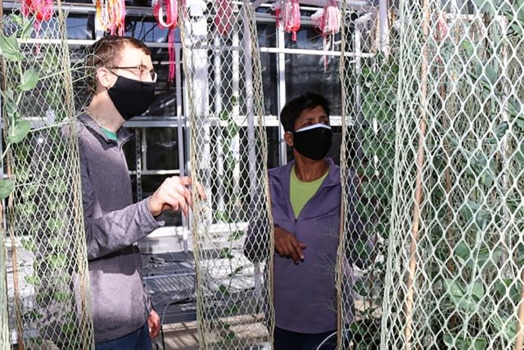 A Clemson University doctoral student says prebiotic carbohydrates found in lentils are beneficial for both human and plant health and should be used to breed for lentil varieties with higher nutritional values. (photo by Clemson University, Creative Commons/flickr.com)

CLEMSON, S.C. – A Clemson University doctoral student says prebiotic carbohydrates found in lentils are beneficial for both human and plant health and should be used to breed for lentil varieties with higher nutritional values.

These new varieties could make lentils a more viable crop for South Carolina farmers to grow and make it easier for low-income populations to have access to nutritious food.

Prebiotic carbohydrates are specialized plant fibers that act as fertilizers to stimulate the growth of healthy bacteria in the human gut. These carbohydrates support healthy guts and are important in healthy diets. In addition, they help plants better tolerate cold and drought. The researchers believe enhancing prebiotic carbohydrates could lead to developing new lentil varieties.

Nathan Johnson of Grand Rapids, Minnesota, is focusing his graduate studies on developing a lentil genetic map of prebiotics for use in helping combat obesity. Johnson, who plans to be a medical doctor, is working with Dil Thavarajah, a Clemson plant and environmental sciences associate professor, and Stephen Kresovich, Robert and Lois Coker Trustees Endowed Chair of Genetics. Their research is supported by a grant from the United States Department of Agriculture’s Institutes of Food and Agriculture (USDA-NIFA).

“Diet-related ailments, such as obesity and micronutrient deficiencies, have global adverse impacts on society,” Johnson said. “Lentils have been associated with prevention of chronic illnesses, including Type 2 diabetes, obesity and cancer. The development of lentil varieties containing enhanced prebiotic carbohydrates could help improve health benefits for humans, as well as help improve crop sustainability and production.”

Lentils are pulse crops that belong to the legume family. They contain significant amounts of prebiotic carbohydrates. Johnson and the other researchers believe it may be possible to enhance these amounts through breeding and genetics.

In addition to breeding for lentils that are easier to digest, the team also is researching to determine lentil genetic traits associated with growing. Current lentil lines produce well in cool weather, May to September in current growing regions. Most lentils grown in North America are grown in Washington state, Idaho and Canada.

“We have identified several significant genetic variants associated with these prebiotic carbohydrates,” Johnson said. “In the future, breeders will be able to use genetic markers based on these findings to develop improved lentil varieties.”

Having more varieties available can help make lentils available to more people. Known as “poor man’s meat,” pulse crops are high in protein and low in fat. They also are packed with folate, iron, phosphorus, potassium, selenium and manganese. Pulse crops, such as lentils, are nutritious and affordable. Many low-income populations use pulse crops as a staple food.

A report from the National Center for Biotechnology Information (NCBI) shows obesity and malnutrition have become significant health burdens, with an estimated 34% of adults and 15% to 20% of children and adolescents in the United States considered obese. Most often, the cheapest foods contain high levels of fat and sugar. A majority of obese people are from low-income families who eat these foods.

To help ease this health burden, Thavarajah said it is important to educate breeders on the importance of including nutrition quality traits into their pulse breeding programs.

“A diet rich in prebiotic fiber and low in calories is important in combating obesity by changing gut (digestive) health,” Thavarajah said. “Research related to this project will help develop lentil cultivars that, in the future, can be grown as a winter crop in South Carolina.”

Future lines for South Carolina would be grown from late November to early May. According to the South Carolina Department of Natural Resources state climatology office, the state’s annual average temperature varies from the mid-50s in the mountains to low 60s along the coast.

Growing pulse crop such as lentils also can benefit agricultural soil and decrease the need for fertilizers by decreasing nitrogen and water use and breaking disease and weed cycles. Rotating pulse crops with selective crops can provide significant ecological benefits, such as more effective nitrogen fertilizer management and nutrient supply management.

In addition to health problems, the obesity epidemic also has a significant impact on the economy. According to the Centers for Disease Control and Prevention (CDC), the estimated cost of obesity-related issues in the United States is in the billions of dollars.