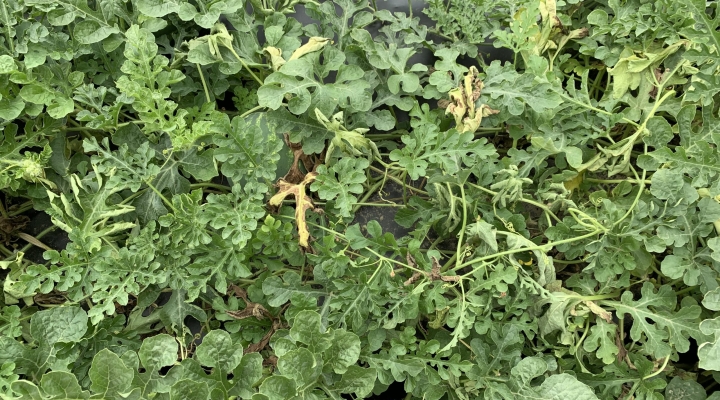 Fusarium wilt is a devastating disease that can cause significant yield loss in watermelon and a Clemson University plant pathologist says cultivar selection is a key factor in managing this disease. (photo by Clemson University)

CLEMSON, S.C. — Fusarium wilt is a devastating disease that can cause significant yield loss in watermelon and a Clemson University plant pathologist says cultivar selection is a key factor in managing this disease.

Tony Keinath, Clemson research and Extension vegetable pathologist stationed at the Coastal Research and Education Center (REC) in Charleston, South Carolina, tested the susceptibility of several different watermelon cultivars to fusarium wilt, as well as the effects of wilt on watermelon yield and quality.

Results of the study show severity of the disease significantly reduces both the marketable weight and number of watermelons. Brix, or the percentage of soluble sugar in the fruit, also was associated with disease severity, but fruit firmness was not.

Disease intensity was recorded during the growing season. The marketable weight, number of watermelons, Brix (sugar content) and watermelon firmness were recorded at harvest.

Shoreline and Joy Ride showed the most disease of all cultivars tested.

Keinath stressed that, along with using disease-free plant material, cultivar selection is important in preventing yield loss for growers.

Over the years, the fungus that causes fusarium wilt, Fusarium oxysporum, has been able to adapt to resistant varieties. This fungus persists indefinitely in soil in the form of resting spores that survive heat, cold and drought. The primary sources of fusarium are infected plant material, soil and/or seeds. Once fusarium wilt is present in a field, it can produce spores which survive for 5-10 years in the soil and can infect future plantings when conditions are favorable. Cool and wet conditions in the spring favor the development of disease in young watermelon plants, but disease symptoms are often not seen until hot and dry conditions stress the plant later in the season.

Symptoms appear starting three weeks after transplanting. In the early stage, the oldest leaves wilt one after the other, starting at the crown, or all at once on a diseased vine. In the middle stage, one or more vines per plant die and turn brown, while the rest of the plant appears healthy. In the final stage, severely diseased plants are stunted or killed.

To diagnose fusarium wilt in the field, cut the main stem or a main vine near the plant’s crown and look for reddish brown discoloration around the edge of the stem. Discoloration often appears on only one side of the stem. If discoloration is not detected, make a 2-inch cut lengthwise up the stem to expose more vascular tissue. Vascular tissue more than 12 inches away from the crown may not be discolored, even in diseased plants.

Fusarium wilt can be difficult or impractical to manage with fungicides, making it critical to establish a cultural control program. Practices for managing fusarium wilt include growing resistant varieties, delaying transplanting until soil is warm (81°F), grafting plants onto a resistant rootstock, applying fungicides and growing cover crops. Combining as many of these practices as possible provides the best results, Keinath said.

Watermelons are produced in all 46 counties, with the bulk of the crop coming from the Central Savannah River Area. Information from the Clemson Cooperative Extension Service’s Home and Garden Information Center shows watermelons are planted from March 25 to April 20 in the Coastal Region, from April 1-30 and from June 15-30 in the Central Region, and from April 20-June 30 in the Piedmont Region of South Carolina. Harvest dates depend on region and varieties planted.

For more information on watermelon research at Clemson go to https://bit.ly/CU_WatermelonResearch.

Producers still have time to respond to USDA hemp survey

Third of Georgia counties under drought conditions
May 19, 2022