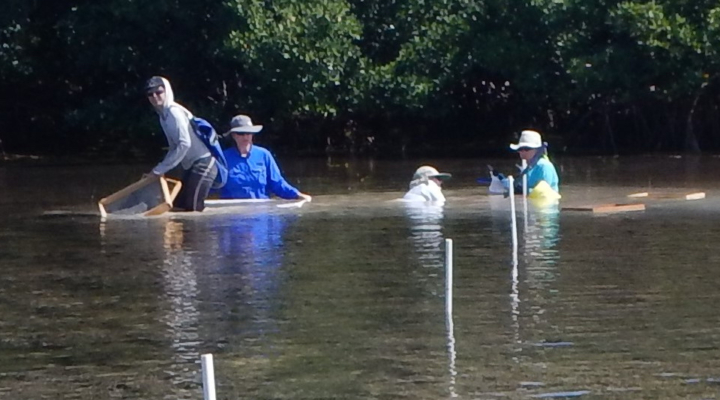 For millions of years, symbiotic bacteria have lived inside the gill cells of Lucinidae clams found in seagrass meadows located mainly along tropical coasts, such as the Florida Keys. These bacteria play a crucial role in the clam’s survival while also contributing to the overall health of the seagrass in which the clams live. (photo by Annette Engel, University of Tennessee, Knoxville)

CLEMSON, S.C. — For millions of years, symbiotic bacteria have lived inside the gill cells of Lucinidae clams found in seagrass meadows located mainly along tropical coasts, such as the Florida Keys. These bacteria play a crucial role in the clam’s survival while also contributing to the overall health of the seagrass in which the clams live.

Seagrasses are important nurseries for marine life and help protect our coasts from storms and sea-level rise.

As important as the bacteria are, little was known about their makeup until now. Scientists at Clemson University have recently published a paper indicating that the bacteria are more taxonomically diverse than previously thought.

Normally, when seagrass decomposes, sulfide is produced which is toxic to seagrasses and clams. However, the bacteria oxidize the sulfide compounds to harmless sulfate, using the energy produced to turn carbon dioxide into sugars for the clam.

“This whole symbiotic process enables the clams and bacteria to live in environments that are not necessarily hospitable,” said Clemson biological sciences associate professor Barbara Campbell, whose research group studies how organisms interact with each other and how the microbiome — the community of microorganisms living in and on multicellular organisms — is involved in that interaction. “The more diverse the symbionts are, the healthier the ecosystem should be. Diversity matters.”

Campbell’s findings have important implications for fisheries and lobster farming, which require a healthy coastal ecosystem, including seagrass beds, in order to thrive.

Campbell and her students collected a sampling of Ctena orbiculate clams from the shallow waters at Sandy Creek Landing on Sugar Loaf Key in the far western Florida Keys. They also surveyed the types of seagrass in the area, conducted physical and chemical surveys of the environment, and counted other clams.

In subsequent months, her team performed next-generation sequencing and analyses in her campus lab and at Clemson’s Genomic and Bioinformatics Facility to characterize the taxonomic, genetic and functional composition of the symbiont bacterial communities.

“We looked at the DNA and RNA, in terms of what [genes are] present, the diversity of the genes and genomes, as well as the diversity of what is being expressed by the bacteria and the host,” Campbell said.

According to Campbell, her research team plans to apply additional experiments to explore the diversity of the genes of both the clams and the microbes, which should provide more fundamental knowledge about the interactions between the two organisms.

The full title of Campbell’s paper, which was published in mSystems, is “Extensive thioautotrophic gill endosymbiont diversity within a single ctena orbiculate (Bivalvia: Lucinidae) population and implications for defining host-symbiont specificity and species recognition.”

This research was funded by the National Science Foundation through its Dimensions of Biodiversity program (grants DEB-1342785 to A.S.E., DEB-1242721 to L.C.A., and DEB-1342763 to B.J.C.). Any opinions, findings and conclusions or recommendations expressed in this material are those of the authors and do not necessarily reflect the views of NSF.