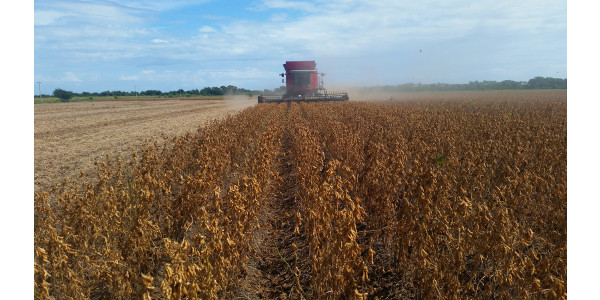 FLORENCE, S.C. — The soybean planting season and growing region have been extended thanks to researchers at Clemson University’s Pee Dee Research and Education Center.

The Agustina soybean cultivar was developed and released by soybean breeders Benjamin Fallen and Emerson Shipe. Fallen said this cultivar possesses the long juvenile (LJ) trait which gives it the ability to produce high yields even when days get shorter and daylight hours are fewer. The LJ trait also allows the Agustina soybean to be grown in regions not suited for most existing soybean cultivars.

“The United States and Brazil are the largest soybean producers,” Fallen said. “Most of the time, when a new soybean cultivar is developed, it is adapted for specific regions in these countries.”

Most soybeans grown in Brazil are found in areas from latitude 10 degrees south to 25 degrees south, or from Mato Grosso to Parana. Most soybean varieties in the U.S. grow in areas between latitudes 35 and 45 degrees north, or from Arkansas to Minnesota. Fallen said Agustina is more adapted and performs best in regions from latitudes 22 to 29 degrees north, which means this line offers a much-needed resource for this region.

Agustina was tested in Tampico, Mexico, which is farther south than 34 degrees north latitude. The first year, this cultivar was the highest-yielding soybean line tested. It was the second highest-yielding the second year, proving the Agustina cultivar can grow in regions outside normal soybean growing regions.

Agustina also is resistant to soybean cyst nematodes, the primary pest of soybeans. Soybean cyst nematodes are small plant-parasitic roundworms that attack roots of soybeans. Management is difficult because of the length of its biological cycle, frequent changes in population virulence and ease of spread via infested soil. Effective management relies on crop rotation in combination with resistant cultivars.

Agustina seed will be sold commercially in both the United States and Mexico. The first year it will be commercial available is the spring of 2018. DBM Farms, located in south Texas, is the company that licensed the variety.

Seed also is available for research purposes or to develop new cultivars and germplasm. Contact Fallen, bfallen@clemson.edu, for more information.

Soybeans typically are planted in South Carolina from May 10 to July 11 and harvested from Oct. 20 to Dec. 30. Top-producing counties are Clarendon, Dillon, Darlington, Florence, Lee, Horry and Williamsburg.

In 2016, in acreage planted, soybean was listed as the No. 1 row crop in South Carolina. Figures from the United States Department of Agriculture’s National Agricultural Statistics Service shows a total of 405,000 acres of soybeans were harvested in South Carolina in 2016.