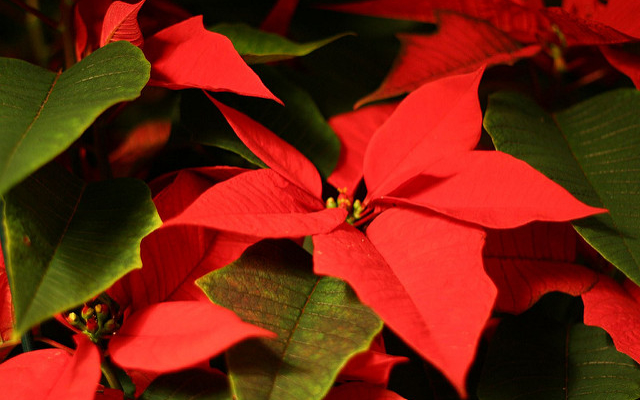 Jim Faust, an associate professor of horticulture who has been studying poinsettias since he was in college in the 1980s, says to buy plants with a full cluster of cyathia, true flowers located in the center of the plant. Colored parts of poinsettias are modified leaves called bracts. (Photo by Debbie R, creative commons/flickr.com)

CLEMSON, S.C. — It’s the Christmas season and if decorating with poinsettias is on your to-do list, a Clemson professor and poinsettia expert has some advice for selecting and caring for this plant.

Jim Faust, an associate professor of horticulture who has been studying poinsettias since he was in college in the 1980s, says to buy plants with a full cluster of cyathia, true flowers located in the center of the plant. Colored parts of poinsettias are modified leaves called bracts.

“When selecting a poinsettia to purchase, consumers should look for a full cluster of cyathia in the center of the showy red bracts,” Faust said. “If the cyathia have fallen out, then the plant has passed its peak performance. Also, the lower leaves of the plant should look fresh and dark green. Yellow, faded leaves are indicators of plants that are nearing the end of their potential shelf life.”

Once the plant is taken home, Faust said it must be properly cared for to continue to look showy throughout the holiday season. Here are a few of his suggestions:

Poinsettias are part of the Euphorbiaceae or Spurge family and are native to the west coast of Mexico. Originally, poinsettias were outdoor plants. The milky white sap found in poinsettias was once used by the Aztecs as a fever medicine. The Aztecs also extracted a purplish dye from its bracts to use in textiles and cosmetics.

The poinsettia’s journey from Mexico to the United States began when Joel Roberts Poinsett, a South Carolina politician, served as the first U.S. ambassador to Mexico. Poinsett believed that agriculture was the key to economic development, so he facilitated the exchange of plants between the U.S. and Mexico in the 1800s. The poinsettia just happened to be one of the many hundreds of plants that were exchanged. Poinsett was honored by having the plant named after him. The name poinsettia continues to be used in most English-speaking countries, while the Mexicans refer to the plant as la nochebuena, translated as the “holy night.”

Poinsettias became indoor plants after Paul Ecke Sr. of California developed the first potted poinsettia plant that could be grown indoors. Ecke began selling these plants from roadside stands along Sunset Boulevard in Hollywood, California. His son, Paul Ecke Jr., took marketing of the plant to a new level when he began advertising in magazines and on television shows. Because magazines are printed months in advance, Ecke Jr. bloomed poinsettia plants out of season so that editors would have images to include in their publications. He also donated poinsettias to decorate the sets of “The Tonight Show” starring Johnny Carson, “The Dinah Shore Show” and the Bob Hope Christmas specials. What began as a minor plant, exploded in to the No. 1 selling potted plant in the United States.

In addition to having the plant named after him, Poinsett’s connection to the poinsettia plant was also recognized by the U.S. House of Representatives when it declared Dec. 12 as Poinsettia Day. This date also marks the death of Poinsett.

Just as Poinsett’s journeys took him to Mexico, Faust too has traveled to Mexico in search of poinsettia information. His travels include a trip to a remote canyon in Mexico to observe wild poinsettias firsthand. In the wild, poinsettias grow up to 12 feet tall and are topped with just one flower. The plants are rather gangly shrubs that cling to steep canyon walls nestled in remote mountainous areas.

Faust’s visits also have taken him to the small mountain town of Taxco, where he attended its annual poinsettia festival. This festival was initiated in the 17th century by Franciscan monks who first used the poinsettia to signify the blood of Christ. Taxco is reportedly the area Poinsett is said to have collected the first poinsettia plants he shipped to the United States.