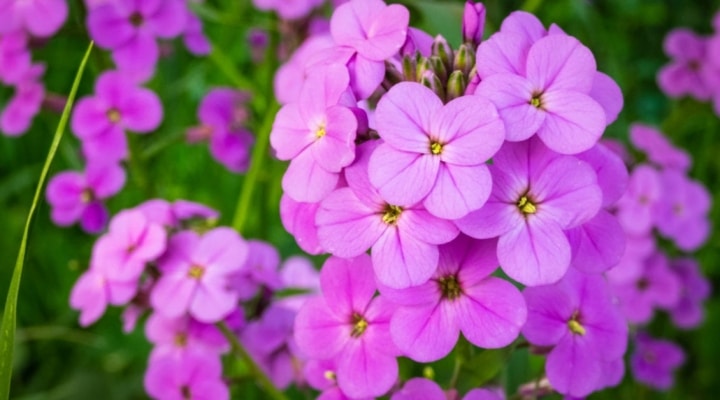 CLEMSON, S.C. — Clemson University scientists have linked climatic fluctuations over the past one and a quarter-century with flower color changes.

Researchers combined descriptions of flower color from museum flower specimens dating back to 1895 with longitudinal- and latitudinal-specific climate data to link changes in temperature and aridity with color change in the human-visible spectrum (white to purple).

The study, which was published in the journal Proceedings of the Royal Society B, showed the change varied across taxa.

“Species experiencing larger increases in temperature tended to decline in pigmentation, but those experiencing larger increases in aridity tended to increase in pigmentation,” said Cierra Sullivan, a graduate student in the College of Science’s Department of Biological Sciences and lead author of the paper titled “The effects of climate change on floral anthocyanin polymorphisms.”

Previous research by Koski and his team, including Sullivan, showed that the ultraviolet-absorbing pigmentation of flowers increased globally over the past 75 years in response to a rapidly degraded ozone layer. That study discussed how flower color changes could influence the behavior of pollinators, which have UV photoreceptors that enable them to detect patterns not visible to human eyes. This study discusses plant color change visible to humans.

“Although we see these changes in flower color, that doesn’t inherently mean it’s doomsday because the forest, plants and animals naturally respond to what’s going on in their environment,” said Sullivan, who hails from Chesapeake, Virginia. “Seeing changes is not necessarily bad, but it’s something to which we should pay attention.”

After researchers retrieved the date of specimen collection and latitudinal and longitudinal coordinates, they obtained historical bioclimatic data from the year and month that the plant was collected. That data included monthly precipitation, minimum, maximum and mean temperature, minimum and maximum vapor pressure deficit (VPD), and dew point temperature. Vapor pressure deficit is the difference between how much moisture is in the air and the amount of moisture that can be held when the air is saturated. It has implications for drought stress in plants — higher VPD means more water loss from plants.

Researchers were able to get complete data sets for 1,944 herbarium specimens.

They found variation among the 12 species. Some increased in pigmentation, while others declined in color over the past century.

“It was all tightly linked to how much climatic variation they experienced over time across their range,” Koski said.

Multiple implications
Two of the species that tended to get lighter in pigmentation are found in the western parts of North America that experienced more dramatic temperature changes than the species in the eastern United States, which had more moderate temperature increases.

“This study documents that flower color that is visually more obvious to humans is also responding to global change but is responding to different factors such as temperature and drought,” Koski said.

He said such flower color changes are likely to affect plant-pollinator and plant-herbivore interactions and warrant further study. Continued research will help give insight to how species will respond to the various aspects of climate change and which species are the most vulnerable to future climate projections,” he said.

This research was supported by the National Science Foundation Division of Environmental Biology Grant 174590 and Clemson University. The content is solely the responsibility of the authors and does not necessarily represent the views of the funders.

Prevent parasites in your flock, herd, or flerd!