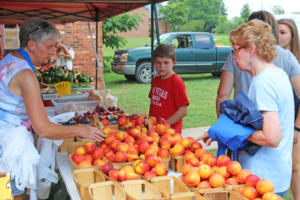 As director of a partnership between Clemson Extension and the Freshwater Coast Community Foundation (FCCF), Wilder Ferreira has worked to develop a series of markets he believes have the power to bolster agribusiness around the Freshwater Coast region of South Carolina. (photo provided by Clemson University Relations)

MCCORMICK, S.C. — It’s a sweltering Tuesday afternoon in June and, despite the heat, a throng of McCormick County residents make small talk as they roam from vendor to vendor examining rows of peaches and blueberries, ripe tomatoes and sweet potatoes, jams and jellies and more — all produced locally in South Carolina.

It’s a scene that didn’t exist at the Dorn Mill Complex on Main Street in McCormick a few years earlier.

“Everybody asks when the market is going to start,” said Barbara Hinkel, who serves on the McCormick County Historical Commission. “I love it because it brings all groups together. We have everybody coming here and having conversations and we’re breaking down barriers between groups and people.”

While many view farmers’ markets as places for buying and selling produce and other goods, Clemson Cooperative Extension agribusiness associate and economist Wilder Ferreira sees them as a way to connect people and revitalize local economies.

“The farmers’ market is a tool for transforming society,” Ferreira said.

The partnership helps launch businesses and provide continuing education support to help them succeed in the Freshwater Coast region of Abbeville County, McCormick County and the Starr-Iva area of Anderson.

As its first major project, the foundation wanted a bold initiative to develop new opportunities for rural, agricultural-based counties to flourish using new agribusiness and entrepreneurship models, according to charter board member Lee Logan.

“(Clemson Extension director) Dr. Thomas Dobbins and (Sandhill Research and Education Center director) Dr. Kathy Coleman joined us in this vision, and Wilder Ferreira was assigned to the task,” Logan said. “What Wilder has accomplished is nothing short of extremely exciting. This started as a pilot project, but it can be very beneficial to all of rural South Carolina. Wilder’s hard work and can-do spirit, joined with the visionaries at Clemson, has put us on the fast track to greater prosperity.”

In collaboration with the FCCF, Ferreira developed a plan for rural development in the Freshwater Coast region and began to teach classes for small businesses owners and farmers on such topics as preparing business and marketing plans, crop production, livestock and bee production.

Clemson Extension hopes to continue building the local agribusiness economy with the hire of Adam Gore as a horticulture agent for Abbeville County. Gore’s role will be to develop an educational program that can also help support area agribusiness, according to Dobbins.

“The Freshwater Coast Community Foundation farmers’ markets are a great example of how South Carolinians can prosper through innovative partnerships,” Dobbins said. “The FCCF has the will and Clemson Extension has the expertise, and now the whole area is benefitting.”

“The idea of the farmers’ market is more than just having the community support and the growers,” Ferreira said. “It’s a place that people meet each other and meet each other’s needs.”

But each of the markets offered a unique set of challenges in getting off the ground. McCormick had previously tried a farmers’ market, but it was unsuccessful in part due to a rule requiring at least 50 percent of a given vendor’s goods come from his or her own farm.

Ferreira’s solution was to loosen those restrictions to allow produce from neighbors’ farms and other South Carolina markets so long as it was produced in the state.

What began with two farmers serving as vendors has grown exponentially to five or six who regularly set up shop from 3 to 7 p.m. on Tuesdays along with other non-food vendors and artists who also sell their products.

“If I’ve got the vendors, then the customers will come,” Hinkel said. “If the customers come then more vendors come. This is what life’s about: It’s about family, it’s about eating well, it’s about camaraderie and getting along with your town and knowing the community. And that’s what I’m seeing happen.”

While balancing supply and demand made the McCormick market tick, the issue in Calhoun Falls not only starting a market where one had not existed before, but also attracting customers to a downtown area that had fallen on tough times economically.

Ferreira worked with the town’s leadership and the S.C. Department of Transportation to shut down Cox Avenue in downtown Calhoun Falls to hold the market from 3 to 7 p.m. each Thursday.

“I’ve seen folks talking to each other as they walk downtown — things that did not exist over the last 10 years probably in Calhoun Falls,” Ferreira said. “The power of transformation of a farmers’ market is just — it’s crazy. You’re building connections within a community that didn’t exist.”

The Calhoun Falls farmers’ market averaged 80 customers during the 2017 season. The market is seeing even greater traffic this year thanks in part to the U.S. Department of Agriculture’s Senior Farmers’ Market Nutrition Program, which aids in the development of new and additional farmers’ markets, roadside stands and community-supported agriculture programs by distributing $25 vouchers to senior citizens.

Senior voucher distribution took place in Abbeville on June 7 and Calhoun Falls on June 14 and Ferreira said the program helped grow the market through word of mouth, particularly among elderly residents living on limited means.

Is your farm ripe for tourism?