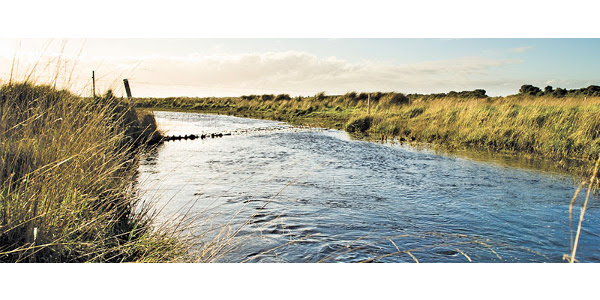 Ultimately, if the Trump Administration's proposed replacement to the 2015 WOTUS rule is approved, expected by May 2020, it will provide clarity to farmers as to where the Clean Water Act jurisdiction starts and stops. (Courtesy of Michigan Farm Bureau)

WASHINGTON, D.C. — Farmers need to stay on point when it comes to submitting comments on a proposed replacement to the Obama Administration’s ill-conceived 2015 Waters of the U.S. (WOTUS) rule, according to Don Parrish, senior director of congressional relations for the American Farm Bureau Federation.

Ultimately, if the Trump Administration’s proposed replacement to the 2015 WOTUS rule is approved, expected by May 2020, it will provide clarity to farmers as to where the Clean Water Act jurisdiction starts and stops.

“It will balance out protection of water-use and land-use the way Congress intended,” he continued. “We think that this administration has done a pretty good job of providing clarity more so than the last administration where they pushed the limits of what the Clean Water Act statute allowed as well as the limits that the Constitution allows.”

According to Parrish, the 2015 WOTUS rule has been effectively stopped in 28 states through court challenges. However, it continues to be implemented in the remaining 22 states. The distinction and financial impacts are significant.

“We don’t think it’s a partisan issue — we think it’s an issue of clear statutory interpretation and a clear interpretation of the Constitution,” Parrish said. “This rule infringes on state sovereignty and should be something that concerns every person in Michigan. We’re all for clean water, but we also want clear rules. This administration is about providing those clear rules, while the last administration’s proposal was an overreach.

“It’s something that is critical to your way of life and what you do in terms of economic development. It’s critical in terms of where you build your roads and what kind of permits you require to start a business.”

Parrish also had high praise for the new mentality and cooperation between EPA, USDA and their desire to work with agriculture to address environmental issues.

“It’s obvious in this administration that agriculture is not viewed just as a problem but as part of the solution,” he said.

“We have a farm bill that provides for incentive-based approaches like EQIP for cost share or CSP for conservation incentive payments all of that kind of work hand in glove with farmers to help them afford and be able to internalize the cost of providing higher value environmental outcomes.”

Calling it a “trial lawyer’s dream,” Parrish expressed concerns over the Lake Erie Bill of Rights, saying it circumvents not only the policy process but also the three branches of government — legislative, administrative and the judicial branch.

“The Lake Erie Bill of Rights tries inserts judges that are unelected into the forefront of circumventing those other two branches of government that’s out there that are elected that are accountable that are there to try to balance the social environmental and economic interest of local communities,” Parrish said. “That’s why we go to the polls — to elect people to work on issues that are important to us and balance those concerns across all those constituencies.”

Parrish advised that farmers take the threat seriously as an issue that “could clearly bite them in the future.”

The steps for good quality corn silage begins now
May 11, 2021