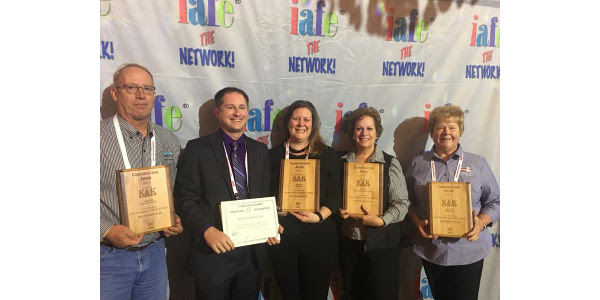 Presented at the Closing Party and Awards Reception on November 29, the Clay County Fair received first place recognition in four categories, along with six other awards, at the Annual International Association of Fairs and Expositions (IAFE) Convention held this week in Las Vegas. (Courtesy of Clay County Fair)

SPENCER, Iowa — Presented at the Closing Party and Awards Reception on November 29, the Fair received first place recognition in four categories, along with six other awards, at the Annual International Association of Fairs and Expositions (IAFE) Convention held this week in Las Vegas.

The IAFE awards program allows member fairs to enter competitions based on competitive exhibits, agricultural education and communications. The entries are evaluated and judged by teams of industry leaders. For the awards program, the approximately 1,100 member fairs of the IAFE are split into five categories based on attendance. The Clay County Fair competes in Division 3, which is limited to fairs across the globe with an attendance of 250,000-500,000.

Taking top honors for “Best Printed Promotional Material” was the Centennial history book. The book was created through the vision of the Fair’s Centennial Celebration committee and the efforts of committee members Kristen Hartwig, Dana Metcalf, Braden Falline, and Cindy McGranahan. The committee worked with F8 Creative for design and the Spencer Daily Reporter for printing. Copies of the book were handed out throughout the summer on the Centennial Booster Tour as well as at the 2017 Fair.

The Fair also received first place for “Magazine Ad” featuring the Fair’s Historic Gate A in a “then and now” photo created by the Fair’s in-house marketing department.

“These awards are all due to the hard work of our Board of Directors, staff, sponsors and partners, and volunteers,” said Fair Manager Jeremy Parsons. “It is an honor to receive these awards and recognition from our peers in the fair industry.”

Besides the four first place awards, the Fair claimed the following other awards:

About IAFE The IAFE is a voluntary, not-for-profit corporation, serving state, provincial, regional, and county agricultural fairs, shows, exhibitions, and expositions. Its associate members include state and provincial associations of fairs, non-agricultural expositions and festivals, associations, corporations, and individuals engaged in providing products and services to its members, all of whom are interested in the improvement of fairs and allied fields.