Home / Oklahoma / Classroom named for father-son duo and their impact on ag education
A new user experience is coming! We'll be asking you to login to your Morning Ag Clips account March 1st to access these new features.
We can't wait to share them with you! Read more here. 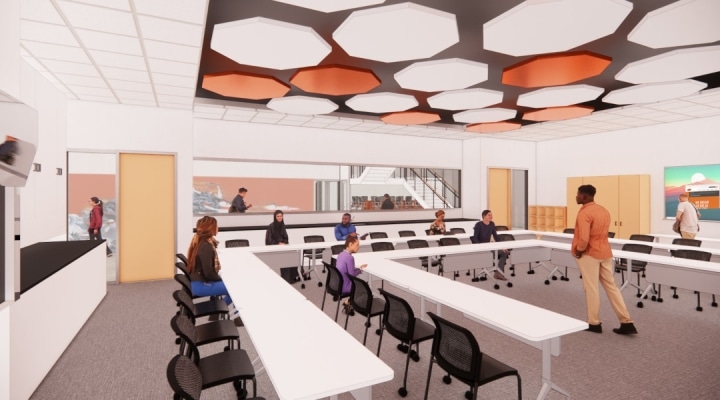 This conceptual rendering of the Dr. Bob Terry Teaching Lab, which will be located in the new home for OSU Agriculture, represents a model learning environment that introduces curriculum and teaching methods to integrate and illuminate more science into agricultural education.

The couple chose to name the Curriculum for Agricultural Science Education Teaching Lab for the Department of Agricultural Education, Communications and Leadership in honor of Phil’s brother, Robert (Bob) Terry Sr., and nephew, Robert (Rob) Terry Jr. The Dr. Bob Terry Teaching Lab will be located on the second floor of the New Frontiers Agricultural Hall.

“Bob and Rob are foundational and integral to agricultural education at OSU,” Phil Terry said. “Ruth and I feel strongly that the names of Bob and Rob should be seen as part of the new building.”

Oklahoma State Regents for Higher Education policy prohibits any naming after an active OSU employee. When Terry Jr. retires or is no longer an active employee, the room will be re-named the Drs. Bob & Rob Terry Teaching Lab.

For the father-son duo, their love for agricultural education turned into livelihoods.

He spent more than 30 years impacting thousands of students’ lives and leaving a legacy at OSU before retiring in 2002. Even after retirement, Terry Sr. remained involved with the university by presenting the history of OSU to incoming students and staying connected with agricultural education.

Terry Sr. said it’s hard to articulate what it means to have the space named in his honor.

“Indescribable,” he said. “I just can’t put my feelings into words.”

“Bob and Rob both love teaching,” Phil Terry said. “When you love what you do for a living, success is usually the result. They are dedicated educators who care deeply for their students and want their students to also be successful.”

When asked what advice Terry Sr. would give to the younger generation, his response was one word: care.

Terry Jr. added his dad had a paper sign posted on the wall of his office that read, “People don’t care how much you know until they know how much you care,” and this was a mantra he always followed as a teacher and espoused as an educator.

Terry Jr. prefers the focus of the named space honor his dad for his impact on students and FFA members and being a leader in Oklahoma agricultural education and beyond.

“It recognizes his career of preparing young people to be ag teachers and the ripple effect of when you prepare someone to be an ag teacher who then impacts so many lives in the local community,” he said. “Following the same career path, I am very aware of his impact and passion for ag education. Dad most definitely deserves having this recognition. I know for him it’s very humbling, and I feel that as well. It’s just an incredible gesture that is well earned.”

Both Phil and Ruth Terry are loyal supporters of OSU and understand the value of agriculture and the importance of school-based agricultural education. That played a role in donating to the New Frontiers campaign and naming a space in the new home for OSU Agriculture.

The Dr. Bob Terry Teaching Lab will be a model learning environment that introduces the CASE curriculum and teaching methods to integrate and illuminate more science into agricultural education. This type of space is not offered in the existing Agricultural Hall and will benefit future teaching efforts and students when the new building opens, which is projected in fall 2024.

Capable of seating 36 students, the space will serve as a flexible, multi-purpose, teaching environment laboratory equipped with distance learning and instruction technology, including livestreaming video, video recording and lecture capture.

The purpose of the room is to replicate high school classrooms and curricula for students studying to become next generation agricultural science teachers. The technology will record students giving lectures or conducting hands-on experiments, which will allow them to watch their delivery and improve their teaching approaches before stepping into a classroom of their own.

In addition to naming, Phil Terry has a special request to include the message “Teaching Teachers” in the classroom décor.