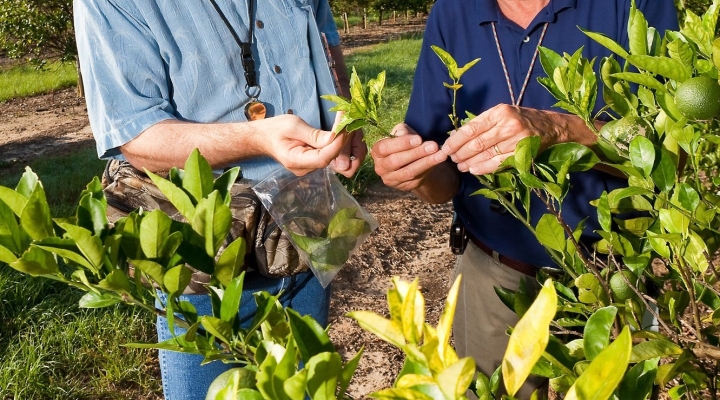 To many residents of Florida, citrus greening may seem like yesterday’s news. But the negative impact this deadly disease continues to have on Florida’s citrus industry is still headline-worthy. (USDA photo by Stephen Ausmus)

LABELLE, Fla. — To many residents of Florida, citrus greening may seem like yesterday’s news. But the negative impact this deadly disease continues to have on Florida’s citrus industry is still headline-worthy.

Citrus greening is the most devastating disease ever experienced by the citrus industry worldwide. Our nation, the state of Florida, and orange growers like me are feeling its wrath.

Florida has been surpassed by California in orange production for the first time. I never thought I’d see this in my lifetime.

Fifteen years ago, Florida was producing more than 250 million 90-pound boxes of oranges annually. This year, that will drop to about 41.2 million boxes — a decrease of more than 83.5 percent. This year’s crop will be at a 75-year low.

U.S. orange production is down by more than 12 percent. As this trend continues, consumers will find it tougher, and more expensive, to find some of their favorite fruits and juices.

At one time, the orange industry was Florida’s largest. Just 15 years ago, more than 8,000 farmers called orange-growing their primary occupation. Now, there are just 2,500 of us, and that number continues to dwindle.

Many multi-generational family farms have had to make the tough decision to get out of orange growing altogether. More work, higher costs, and thinner profit margins have made it virtually impossible for smaller growers to make ends meet.

Citrus greening is a bacterial disease transmitted by a tiny insect called the Asian citrus psyllid. More than 1.5 million Florida orange trees have been infected by this insect. In the early 2000s, there were 900,000 acres of orange trees, now closer to 400,000 acres and dropping. There’s not an orange grove in the state that hasn’t been impacted, including mine.

Once a tree is infected, there’s no cure. The disease poses no threat to humans or animals, but it has devastated, thousands of acres of trees in Florida. Infected trees produce green, misshapen, and bitter oranges, unsuitable for fresh fruit or juice. Most infected trees die within a few years.

Florida has spent upwards of $165 million to battle citrus greening. Worldwide, that figure is more than $1 billion. Federal and state organizations, universities, associations, communities, and growers have battled the disease, and so have various efforts throughout the world.

The answer has yet to be found. A balanced attack is underway. We can’t procrastinate. For every step backward, we must take two steps forward.

One significant step forward with potential is the Citrus Research and Field Trial (CRAFT) program. Growers are paid to record their unique growing practices and the end results.

Nearly 5,000 acres of orange trees have been replanted in one of the largest field trials ever in the U.S. citrus industry. Many Florida growers are on the CRAFT waiting list to help make a difference.

From pesticides to grower ingenuity to soil testing to watering practices to new nutrients, many elements must be studied to save Florida’s citrus industry before it’s too late.

The negative headlines won’t miraculously stop. But we Florida citrus farmers are an optimistic bunch. Our hope is to secure continued and additional federal, state, and local support.

With some hard work — and a little luck — we just might make it back to No. 1.

(Paul Meador is president of Everglades Harvesting, Inc., a Labelle, Fla. Orange producer. Florida is now the nation’s second-largest producer of oranges. The state is expected to have its smallest orange crop in 75 years due, in large part, to citrus greening.)