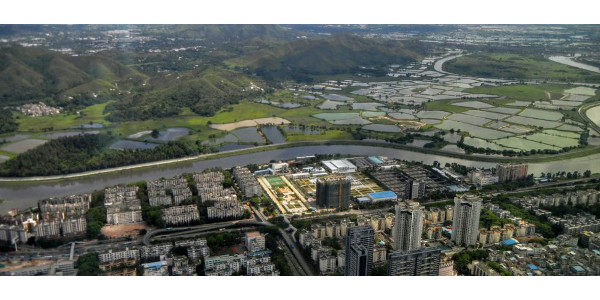 Researchers found that 19 of 29 large cities depend on evaporation from surrounding lands for more than one-third of their water supplies. Pictured here is Shenzhen, China. (Photo: Patrick W. Keys)

FORT COLLINS, Colo. — Urbanization has taken billions of people from the rural countryside to urban centers, adding pressure to existing water resources. Many cities rely on renewable freshwater regularly refilled by precipitation, rather than groundwater or desalinated water.

A study led by Colorado State University found that 19 of the 29 largest cities in the world depend on evaporation from surrounding lands for more than one-third of their water supplies. Researchers also found that the dependence on this water supply is higher in dry years. The findings have implications for land managers and policymakers who oversee urban water security.

CSU research scientist Pat Keys is part of a team that had previously coined the term “precipitationsheds,” a watershed of the sky that identifies the origin of precipitation falling in a given region. The new study, “Megacity precipitationsheds reveal tele-connected water security challenges,” is published in PLOS One.

One of the study’s key findings is how moisture recycling is linked to a city’s water supply, said Keys. Cities that are most dependent on this type of recycling include Karachi, Pakistan, and three cities in China: Shanghai, Wuhan and Chongqing. At the opposite end of the scale, the research team found the cities with the least vulnerable moisture recycling include Cairo, Egypt; Paris, France; Sao Paulo, Brazil; and Chicago, United States.

“A lot of these cities have complex and significant management processes for water resources and supplies,” said Keys, a researcher in the School of Global Environmental Sustainability at CSU. “Cities like Chicago have experienced water stress in the past, but they are well-buffered by water management. On the other hand, many megacities are not able to buffer themselves from fluctuations in climate and seasonal weather patterns, such as Lagos in Nigeria, or Rio de Janeiro in Brazil,” he said.

Moisture recycling occurs when water evaporates from the land and rises up into the atmosphere. This moisture then flows along prevailing wind currents through the atmosphere, falling out as precipitation elsewhere.

“What you do on the land influences that whole branch of the water cycle,” said Keys. “If you plant a forest or cropland where there used to be a shrubland or desert, it probably won’t last without substantial irrigation. If you change the amount of water or change when it is evaporated and flows up into the atmosphere, that can have impacts for other places and people.”

Researchers evaluated the sources of municipal water for 29 cities representing more than 450 million people around the world, and found that most of these cities relied on surface water. The team then used a moisture tracking model to calculate the precipitationshed for these sources of surface water.

In this way, Keys and his team explored the various changes taking place in the precipitationsheds of the 29 cities, and calculated the corresponding vulnerabilities.

“Cities and countries have limited resources,” he said. “If I were in one of those highly vulnerable cities, I’d want to look at this additional dimension of vulnerability for the water supply.”

In addition, very few of the cities highlighted in the study will shrink in size, and more “megacities” will be added to the list.

“How do cities buffer the changes?” said Keys. Reservoirs, treatment and desalination plants are potential safeguards to mitigate the changes.

Researchers did not explore climate change as part of the study, which would make an additional difference. Said Keys: “With climate change, and demographic and land use fluctuations, it is important to understand where vulnerabilities exist and have a full picture.”

Study co-authors include Lan Wang-Erlandsson, a post-doctoral fellow at the Research Institute for Humanity and Nature in Kyoto Japan, and Line Gordon, associate professor at the Stockholm Resilience Centre, Stockholm University.

Get mad about precipitation